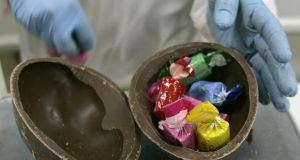 Trying to choose an Easter egg could drive even the sanest person a little nuts. Do you go for the old favourites, such as Dairy Milk? Or an indulgent Irish version from Butler’s or Lorge in Kenmare? Do you choose based on size, the accompanying sweets or the free mug? Are three eggs for €5 better than one big one that weighs half a kilo?

It’s a conundrum, and that’s before you even start to think about calories, sugar or additive levels? But the nutrition panel is an interesting place to start.

The surprise is that so many milk chocolate eggs on the market have about the same number of calories per 100g.

What this all means is that portion size is very important – especially if you buy a big egg. Don’t pay any attention to those panels giving the number of calories in a typical serving. Chocolate egg makers seem to think we should be happy with a little chunk of confectionery – even at Easter.

Cadbury, which has been criticised for bringing out the 570g Crunchie Chocolate egg, notes on the packet there is 130kcal in a serving of the egg. In Cadbury’s world, a serving is deemed to be just 25g, which seems completely unrealistic.

It doesn’t say how much sugar is in the whole package of Crunchie egg and bars, but it adds up to about 330g. The World Health Organisation recommends that the average adult have no more than 50g per day and children up to six years no more than 19g. So that’s something to keep in mind when divvying up a monster egg on Sunday.

The rich, dark eggs may look even more sugary and calorific than dairy ones, but that’s not necessarily the case. Butler’s Dark Chocolate egg with 70 per cent Cocoa Dusted Truffles, for example, comes in at just 486kcal per 100g. The extra cocoa makes that a healthier choice too, but one less likely to appeal to children.

There are outliers. The Ferrero Rocher egg has 608kcal per 100g. A look at the ingredients shows why. Yes, there is lots of sugar, but the nuts make the difference. This egg is 20 per cent hazelnuts and the accompanying praline sweets are 28 per cent hazelnut. Check out the labels on other eggs that contain nuts and you will find similar results.

That’s one reason why it’s not a good idea to focus on calorie count alone. Nuts are very nutritious and most of us could do with eating more. Hazelnuts are loaded with vitamins and minerals, such as magnesium, copper and vitamin B6.

With Ferrero Rocher, there is a link to Christianity that other chocolates don’t have too. The praline sweets apparently were created to look like a grotto in Lourdes from which they take their name (Roche being French for rock). The Italian creator of the sweets, Michele Ferrero, was a regular visitor to the religious site. The confectioner also created Nutella and Tic Tac mints. Ferrero, which is family-owned, is the second-largest confectionery company in Europe and fourth in the world after Mondelez, Mars and Nestlé.

What those companies have in common is that their sweets tend to have more additives, flavourings and emulsifiers than in the artisan Irish brands. So they may be cheaper, but some emulsifiers have been found to cause issues with the gut bacteria that helps to keep us healthy. The research has been done on animals so far, but it is not encouraging.

It’s not all bad news, however – chocolate is nutritious too as the label on Áine’s chocolate eggs, which are made in Co Cavan, point out. They have protein, fibre, vitamin A, calcium and iron in good levels in each egg, which might be just what you need to get through the weekend . . .