Start them stirring, knife skills at four: how to teach kids to cook

Some of the best ways to get children interested in cooking, by Darina Allen, Thomasina Miers and more 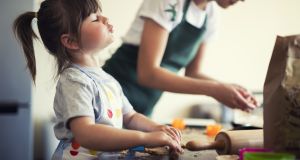 The golden rule to getting children interested in cooking is patience – and lots of it. “It can be a slow process,” says cook Thomasina Miers.

“I talk about how delicious food is and always put olive oil, lemons and herbs on the table for them to add to their meal.”

And it’s a good idea to start them young. “Kids are mimics,” says restaurateur and author of Australian Food Bill Granger, “so they’ll do what you do.”

Perhaps controversially, Allen then turns to knife skills: “Lots of parents wouldn’t be happy with this, but from three and a half to four years old they can hold a knife. It’s vital they’re shown how to use one safely, keeping the tips of the fingers tucked under the knuckles and, if they’re using the tip of the knife, to put the index finger along the back of the blade.”

Don’t be afraid to deploy underhand tactics, aka bribery. Miers suggests banana and chocolate bread or fairy cakes to tempt five-year-olds into the kitchen: “They’re fun and sugary – you’ve got to get them that way.”

Use a dessert spoon to scoop icing on to a cake or cupcake, then use the back of the spoon to create waves and spread on the icing

Allen finds success in drop scones: “Children can put spoonfuls on to a frying pan, wait until the bubbles rise and burst, flip over with a palette knife and cook on the other side.” If enthusiasm wavers, baker Lily Jones, founder of east London’s Lily Vanilli, relinquishes control over decorating cupcakes or cookies: “Their enthusiasm can drop off a cliff abruptly, so I’m quick to do the boring parts.”

By the time they’re eight, Granger looks for dishes with a bit of a process: “Pizza dough is great: I use three cups of flour, a cup of water and a couple of teaspoons of yeast.”

Kids can then go all-out on toppings. Try quick and easy dips, such as hummus, which children can cut celery and cucumber into sticks to dip in, or get the box grater out for vegetable fritters (Allen recommends carrot and spring onion).

Miers says: “A cheese and herb omelette is also a good skill to have. Children can grate cheese and cut herbs (with scissors if their knife skills aren’t up to it).”

Crumbles and traybakes (think flapjacks) are, of course, good for most ages, but Jones suggests adding basic icing techniques to their arsenal too: “Use a dessert spoon to scoop icing on to a cake or cupcake, then use the back of the spoon to create waves and spread on the icing.”

When they hit their teens, it’s time to experiment. “Find out what their favourite food is and get a cookbook,” Granger says, who then puts them to work cooking for friends. “After all, kids like showing off.” – Guardian