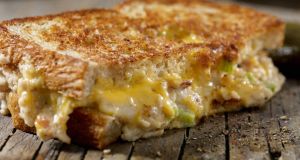 The humble cheese and ham toastie is Ireland’s favourite sandwich, with the seasonal special of turkey and stuffing - not too long now to wait for those - coming a close second. Chicken tikka with onion bahji is the adventurous choice, but not surprisingly, there is little take up for a banana and mayonnaise sandwich, even though one in 10 of us say they would eat anything all sandwiched between two slices of bread.

New research released by the Irish Bread Bakers Association (IBBA) to mark World Sandwich Day today, also reveals that for almost half of us (45 per cent), a sandwich is our favourite comfort food, increasing to almost seven in 10 (69 per cent) in those aged between 18 and 25.

Lockdowns #1 and #2 have brought out the toastie munchers in many of us, it seems. “Making a sandwich doesn’t require too much thought. It’s a break from the pressure - something safe, routine and reliable amidst all the change and unpredictability. This can be a helpful coping mechanism,” says psychologist, Niamh Hannan.

Chicken tikka with sliced onion bhaji is the unusual sandwich filling people would be most willing to try (34 per cent), just ahead of baked beans with cheese and bacon (31 per cent). Only those in the over 55 age category gave any credence at all to the banana and mayo option. But don’t discard the mayo completely. Smeared on the outside of a sandwich before toasting, it gives a lovely golden savoury crust.

According to Catherine Cleary, the best toastie in Ireland is to be found in The Cheese Press in Ennistymon, Co Clare. “It costs less than €6, is buttery toasted on the outside and filled with Coolattin Cheddar, a raw milk cheese that’s aged for a year in its distinctive red muslin cloth. Cassie’s Bakery from the market in Moycullen makes the sourdough loaves. Putting this level of farmhouse cheese and properly fermented bread in a toastie outside of hipster brunch zones is a revolutionary act,” she says.

If you want to up your toastie game at home, you could follow the instructions from Brian O’Caoimh and Kevin Powell of Loose Cannon on Drury Street in Dublin 2 for the ultimate cheese version. It is filled, not too copiously, with Coolea Farmhouse Cheese and Derg Cheddar, and given four minutes toasting on each side, followed by time to rest before you tuck in.

“The goal for your toastie should be a sandwich that is wonderfully toasted on the outside and melted to perfection on the inside. If you over fill the sandwich, the cheese won’t melt properly, or you’ll burn the bread and dry it out,” they say. Here is their recipe:

To make the béchamel:
1. Melt the butter in a small pot and once it’s melted and foaming add the flour and stir for about 60 seconds.

2. Slowly pour in the milk and continue whisking until the sauce is smooth and thick.

3. Place in a container and cover the surface with clingfilm. Allow it to cool down and then pop it in the fridge for later.

To make the sandwich:
1. Spread two tablespoons of the béchamel on the first slice of bread, add your cheese and scallions.

2. Top the sandwich off with the second slice of bread, and brush butter on each side.

3. If using a frying pan, get it nice and hot but don’t put any oil or butter in it. Instead, place a disk of baking paper in the pan and sit the toastie on top of it, this stops the cheese burning and sticking to the pan.

4. Turn it after about four minutes and press down gently. Remove from the pan, let it cool for two or three minutes.

5. If you are using a sandwich press or grill, cover both side of the toastie with baking paper and allow it about four to five minutes in the press.