New London beers from under the bridge

Five Points brewery, based under a railway arch in Hackney, has just started stocking their range in Ireland 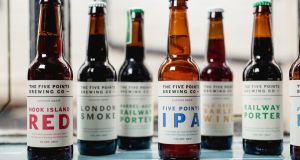 While some breweries have a different beer out every other week, Five Points has focused mainly on their core range. Photograph: www.marknewtonphotography.co.uk

Five Points is the latest of the London craft breweries to hit these shores, following in the footsteps of Beavertown, Weird Beard, FourPure and others. Based in Hackney, under a Victorian railway arch, it’s their fifth anniversary this year.

“We were worried that we might be a bit late to the party,” explains Ed Mason, who visited Dublin recently with head brewer and co-founder Greg Hobbs. “We were, like, brewery number 15 in London . . . But five years later there’s 100 breweries, so now we’re considered as one of the first wave of the London breweries.”

With a little knowledge-sharing and support from nearby breweries, such as Kernel and Camden, they’ve built up their local and national following, and are now bringing five of their beers to these shores.

“There’s different models for different breweries,” says Mason. While some breweries have a different beer out every other week, Five Points has focused mainly on their core range. “We’re not trying to be the coolest kids on the block.”

Five Points will brew five collaborations to mark their fifth birthday, including one with Wexford brewery Yellow Belly. They’re also hosting an Irish beer festival in Hackney in March with 10 Irish breweries including White Hag and Whiplash.

Five Point Pale is their flagship beer and biggest seller – and it’s easy to see why. This is a tasty beer, with just the right balance of bitterness, juiciness and crispness, and is a sessionable 4.4 per cent. There’s a full-bodied malty red ale; an Xtra Pale Ale full of tropical fruitiness with a light body; and a big, old-school 7 per cent IPA. Overall, this is a solid line up of beers – and if you haven’t treated your taste buds to the loveliness of a quality brown ale, get your hands on a bottle of their Brick Field Brown.