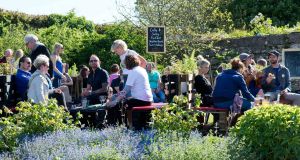 The organisers of the Litfest at Ballymaloe are axing the annual food festival because of the challenge of funding the event and finding great speakers in a world “awash with food festivals”.

Festival director Rory O’Connell said at the end of last year’s Litfest that the annual event was going to take a break for a year and return in 2019. But in recent weeks he said they decided “a line has been drawn under Litfest”.

“Money is tied up in everything. It was a big cost to put it on but that’s not the main reason. We felt we had achieved what we wanted to do in that particular form. It had gone from being a food and drink literary festival to a food and drink literacy festival,” O’Connell said. That approach changed the philosophy behind the festival into something more political and that will be continued on in something “smaller and more focused”.

When the festival started in 2013 “we thought we’d have this endless volume of really incredible people and we discovered that wasn’t absolutely the case. Ireland and the world is awash with food festivals,” O’Connell said “In some way it’s a good thing but quality can fail ... some of them are very good and some of them are not very good.”

Festival manager Rebecca Cronin said they had world-class content in the first and second year. “We didn’t want to repeat things. We wanted new voices explaining a new point of interest.”

“So we took the year off (and I had a baby in the meantime) to try and figure it out,” she said and they decided to call it a day on Litfest. “We knew people really enjoyed the event and we don’t take that commitment for granted,” O’Connell said. “There were people who travelled every year and it was great craic.”

Litfest was described by organisers as “an important hub for food enthusiasts worldwide to meet and share ideas with each other.” That aspect is what Cronin takes away as its success. “One of the most important parts was the creativity and collaborations that came from meetings at Litfest,” Cronin said.

One of her proudest moments was arriving into chef Christian Puglisi’s Copenhagen restaurant Relae last year where his business partner told her Puglisi’s visit to Ballymaloe changed everything for the restaurant. Puglisi later told her he had been inspired to buy a farm, source his own herd of cows to deliver the kind of food he had seen on the east Cork farm.

O’Connell said they would take the spirit of the festival and turn it into something “more political and harder-edged”. His current favourite idea is EggsFactor, an event centred on “the perfect food, the perfect packaging that comes from one of the most abused creatures on the planet.” Hens, he said, “are timid, beautiful, sweet. They eat up your kitchen scraps and make you a perfect food. We eat eggs every day and take them absolutely for granted. It is the whole discussion ... I don’t know why there aren’t statues erected to hens.”

The end of the line for Litfest after five years in the Irish food calendar will leave a legacy, he said. “Whatever we do next will be more political, harder edged and focusing on creatures. If humans are involved it’ll be farmers, so creatures and the people who mind the creatures,” O’Connell said.