Is airline food a reflection of consumer anxiety?

Why do we eat on airplanes? It’s certainly not because food tastes better at 30,000ft 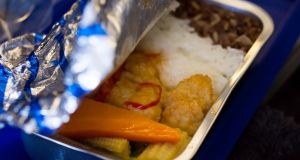 Tasty: low pressure in aircraft reduces the sensitivity of taste buds to sweet and salty foods by 30 per cent. Photograph: iStock

In a fascinating essay, published in Food for Thought: Essays on Eating and Culture (2007), entitled Is It Really Better to Travel than to Arrive? Airline food as a Reflection of Consumer Anxiety, Guillaume de Syon offers up a history of food in the sky. “Up to World War II, airplanes flew unpressurised at low altitudes, and oil leaks, kerosene smells, deafening noise and serious vibrations were par for the course for any passenger who chose to fly,” writes de Syon. “All this contributed to a pathology of flying that culminated in the fear of falling or crashing. Thus any occupation that help keep passengers’ minds away from staring at the engines on the wings, for example, was a good thing.”

Is there a more comforting distraction than food? “Originally, food was more about giving passengers something to do,” concurs Enda Corneille, the country manager for Emirates in Ireland. “If you were flying between Dublin and the US in the 1960s, the flight could take up to 13 hours. Now it’s a six- or seven-hour run. Flying was a very different experience in those days so food acted almost as a comfort to passengers, especially on their way home from their trip.”

But whether you’re flying short-haul on a budget airline in economy or long-haul in the luxury of first class, there is still the issue of how our tastebuds react to air travel. “It is hard to appreciate a wine’s bouquet or the freshness of a brioche in the literally rarefied atmosphere of an aircraft,” writes de Syon. “Nostrils are dry, and associated dehydration prevents taste buds from working properly.”

According to a 2010 study conducted by Germany’s Fraunhofer Institute for Building Physics, the dryness and low pressure of air travel reduces the sensitivity of your taste buds to sweet and salty foods by 30 per cent.

In 2015, Aer Lingus introduced its DIY crisp sandwich. To me, this was the double-wammy of comfort food distraction. Take your mind off the jet stream bumps by giving yourself a task of making, and then consuming, a crisp sandwich. Genius.

Have a food question you need answered? Contact @aoifemcelwain on Twitter or by email at magazine@irishtimes.com with “Now We Know” in the subject line.

‘Sadly my marraige ended, but it was the kick I needed to start my own journey’
7

I'm up for sex the whole time, but my husband sees it as not putting in any effort
10