Another Round: John Wilson samples five releases, including a €500 28-year-old reserve 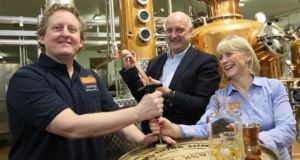 Drumshanbo: ‘We’ve done all the heavy lifting ourselves. Everything was done from start to finish in the Shed,’ says Pat Rigney of the Co Leitrim distillery

“We’ve done all the heavy lifting ourselves. Everything was done from start to finish in the Shed, in Drumshanbo. It is seven years since starting the project, and five years since we began distilling,” says Pat Rigney.

Drumshanbo Single Pot Still Irish Whiskey is their flagship of the future, although there will also be various other expressions to leave room to explore.

“We found that Single Pot Still needs to be given a little more time – four and half to five years – to get the quality we want. This has no added colouring, non-chill filter. It is a bourbon heavy whiskey, with a small portion aged in oloroso casks.”

The Drumshanbo (€60) is an elegant whiskey with a creamy texture, plenty of spice and notes of toasted wood and subtle fig.

Teeling has two new releases, the 28-Year-Old Vintage Reserve Cask and the Brabazon Series Three. The Brabazon (€95) is a 14-year-old single malt that has been matured for three years in very old, well-seasoned Pedro Ximénez casks. It is a powerful (49.5 per cent) whiskey with intense raisins, figs, molasses and tobacco. Four thousand bottles of the 28-year-old (€500) have been produced. Its predecessor, the 24 year-old Vintage Reserve Cask, was awarded World’s Best Single Malt at the World Whiskies Awards. This has spent the past eight years in Sauternes casks, and has an enormous intensity of honeycomb, ripe fruit and smoke. “It raises the hair on your arms,” according to distiller Alex Chasko.

Sliabh Liag Distillers, in Co Donegal, has released the Legendary Dark Silkie (€42), a peated smoky whiskey. This is a smooth, warming whiskey with masses of sweet smoky peat and dark chocolate.

Lastly, the Grace O’Malley label’s new limited release is a Rum Cask Irish Whiskey (€65). This has sweet, rounded tropical fruits and a touch of vanilla spice that come together very nicely.

All these whiskeys should be available at specialist retailers, online direct from the producer, or from celticwhiskey.com, irishmalts.com or wineonline.ie.

Michael Harding: Though I cheered for Biden, I was more like Trump than I could admit
4