After too much lockdown eating, the lightness of these summery dishes is just perfect 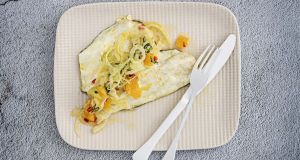 So we’re back at work, sort of. Here at the Tannery in Dungarvan we’re doing a simple takeaway at weekends. It’s just as well, as I’m not good at doing nothing. Despite plenty of walking, the pounds are creeping on. It’s not surprising really as the whole focus of the day has been on what we were going to have for lunch and dinner. I was constantly cooking, then inevitably it was couch time. I could feel myself getting more bootylicious by the day.

I tried doing a bit in the garden, but unsurprisingly, digging holes isn’t my forte. It’s not great when your wife banishes you to the kitchen with an ill-concealed roll of her eyes as a result of your general uselessness. I’ve always been a good worker but my body refuses to obey my mind once it goes outside. It only operates full belt in the warm confines of the kitchen.

The food this week isn’t what we are serving from the Tannery kitchen, instead it is the food I’ll be having at home this bank holiday weekend, to help with the battle of the bulge.

The whole thing about lighter food is that it shouldn’t resonate of penury, misery and guilt. Otherwise you won’t be satisfied. I love lemon sole, but if you can’t get it, use plaice. I’m cooking double fillets that are brushed with some crème fraiche and drizzled with a little olive oil. This prevents the fish from drying out while it is cooking. The crunchy fennel salad that goes with it is one I use a lot in the summer, often paired with burrata or goat’s cheese.

The broth is given body by roasting some ciabatta with a little olive oil. It’s kind of a soupy version of a panzanella, that lovely Italian bread salad. The smoky, pungent juice seeps into the bread to make it ultra-satisfying.

This salad is simple and requires good leaves and ripe tomatoes, otherwise don’t bother trying to make it. A light dressing of gazpacho, some pert courgette and manchego cheese give a gentle nudge towards the Iberian peninsula. This recipe makes more dressing than you need, but it freezes well. Use Parmesan if you can’t find manchego.

4 large double fillets of lemon sole, skin on
2 tbsp crème fraiche
75ml olive oil
2 bulbs of fennel, trimmed and sliced as thin as you can, keep any fronds to chop through the salad
1 orange, peeled and segmented
Half a red chilli, deseeded and finely diced
A little pinch of sugar
4 tbsp olive oil
Salt and pepper

1 Preheat your oven to 185 degrees Celsius.

2 Put the sole on an oiled tray, skin side down, then apply the crème fraiche in an even layer over the top.

3 Drizzle with some of the olive oil, then set it aside until you’re ready to cook.

4 Mix the fennel with the orange segments, chilli, sugar and remaining olive oil.

5 Chop any fennel fronds you may have and add them, then season with salt and pepper.

6 Depending on the thickness of the fish, bake for eight-10 minutes, or until cooked .

7 Serve with the fennel and some boiled new potatoes.

2 Drizzle a little of the olive oil over the bread and roast it for 12-15 minutes until golden and crisp.

3 Meanwhile sweat the fennel, pepper and garlic in the remaining olive oil over a gentle heat for 15 minutes or so, until soft and sweet.

5 Bring to a simmer and cook for five minutes before adding the tomatoes, honey, salt and pepper.

7 Scatter the bread into warm bowls then ladle the soup over the top along with the Parmesan and fresh basil.

1 Blend the tomato, pepper, cucumber, garlic, water, olive oil, vinegar, basil and sugar together in a food processor until smooth.

2 Season with salt and pepper and then keep in the fridge. Like a true gazpacho it’s better chilled.

3 When ready to serve, turn your leaves and the courgettes in the gazpacho dressing and place in a large bowl.

4 Scatter over the tomatoes and cheese shavings and serve.