Sole Seafood and Grill: A new Dublin restaurant where fish gets pride of place 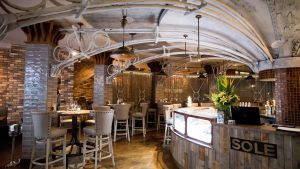 Dublin dining has come a long way since the 1990s. But there’s still a gap in the market for the clattering clank of a big old brasserie nailing it every night for a large happy crowd. I’d love a big room with big flavours like when Paul Flynn manned the stoves in La Stampa and threw his eye over it again with its brief reincarnation as Balzac.

We’ll see how The Ivy manages when it opens but in the meantime there’s Sole on South William Street. In its last incarnation it was Zaragoza, a big tapas place whose size and location were its two best attributes.

Now it is Sole and the place has been decked out to look like the inside of a big ship. There are acres of grey painted panels with rivets for that faux ocean liner look and booth tables. They have a beautiful fresh fish counter at the front, lots of lovely specimens on ice under glass draped like gloves in an old country drapers. They’ve resisted the urge to dress the staff in sailor’s outfits but there’s a “captain’s table” vibe to the menu and plenty of heftily priced dishes to lure the whale customers out of the shadows.

The menu opens with an essay about fish, a short lecture on how we have “some of the best seafood in the world available to us right on our shores”. Yay. All that fish-frottaging stuff that small places like the Fish Shops on Queen St and Benburb St and the Klaw mini empire have been doing for a while now but dressed up in a posh room. Flip forward and menu lists sea bass, a fish farmed in the Mediterranean, as one of its main dishes. That must be one of the “unique flavours from global waters”. It seems like a having-your-cake-and-eating-it approach to food from the sea.

Far flung farmed fish and Indian Ocean prawns are what it takes to put a fish restaurant into the mainstream on our island, it seems. Working only with what the boats land here is still the preserve of the smaller more nimble restaurant.

The good news is we get two terrific dishes here tonight. But the standard goes through more dips than a night ferry in a storm. The best of the two starters are the tiger prawns, fat and juicy and charred expertly with that smokiness that makes them taste like they’ve just come off a beach barbecue. They need nothing more than a squeeze of citrus.

My lobster cakes are less simple, crumbed mounds of nice lobster meat with potato, some scallions, too much dill and something called ice lettuce. This isn’t a trendy name for iceberg lettuce it’s a succulent that’s shaped like a holly leaf (and dressed here with pomegranate seeds as if to mimic the red berries of holly). It has a texture somewhere between a cactus and a sea vegetable. It gets its name from the tiny beads of trapped liquid that look like frost and has a juicy lemony flavour to it. Jenny McNally is growing it on her farm in north Dublin but she’s had no interest from restaurants (I suspect this supply is coming from further afield). She’s selling her ice lettuce on her Temple Bar food stall if you want a talking point for your next dinner party.

We’re sold on the half lobster by the lovely waitress who tells us it’s fresh from the Atlantic. It is everything we want but one of the smallest specimens I’ve seen in a restaurant. The seabass dish is expertly fried, skin crisp, fish jazzed up with blue potatoes which look good but taste about as special as supermarket roosters. The nicest mouthfuls on the plate are the tempura oysters; blisters of crisp briney chewiness.

My catch of the day is the star of the night, a meaty whole brill roasted in butter so expertly that the flesh is virtually confited, pulling away from its spiney web of bone sweet and juicy as good chicken. But a side of broccoli and black garlic is bitter, with a mushroomy honk that someone at the table likens to licking a mouldy shower wall. New potatoes look fine but taste as waterlogged as a low-lying field in winter.

When we order a glass of wine we’re offered the “entry level Chardonnay”.

“What’s that?” someone at the table asks. “It’s the cheapest one,” someone else answers.

Sole offers plenty of scope to leave “entry level” shores and take yourself to far pricier ones. The “signature seafood towers” start at €70 for a sharing plate for four people.

Sole is an encouraging sign that one of our best raw ingredients is finally being given pride of place. The sweet spot will be reached when scaling it up for a big room doesn’t mean scaling it down on flavour. I’d hope that’s something they’ll get into the swing of here.

Dinner for three with two glasses of wine, sparkling water, coffee and tea came to €148.50

Food Provenance: Plentiful. Oysters from Dungarvan clockwise round to Carlingford