The best snacks for a bumper weekend of sport

The World Cup, the golf, the grand prix and the GAA: Here’s some easy food and beer ideas to fuel your fandom in front of the TV this weekend 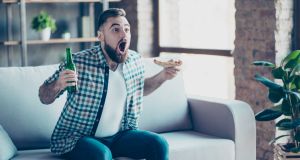 Sports fans can rejoice – and take a break from the sunshine – as it’s set to be a jammed packed weekend of events on TV. The World Cup continues today as England and Sweden meet at 3 pm and Russia and Croatia will kick off at 7pm. Tennis fans can have their Pimm’s at the ready for day six of Wimbledon which starts this morning; while the British Grand Prix kicks off in Silverstone this afternoon, and the Irish Open will continue in Ballyliffin in Co Donegal.

With the scorching summer weather set to continue, this makes for the perfect excuse to fire up the BBQ, stock up on ice and invite friends around for a bite. Whether or not you end up watching any sport is up to you. To ensure your stomach is as full as this weekend’s sporting calendar, we’ve compiled a list of tasty recipes to make for a memorable weekend – win or lose.

Pizza is unrivalled in its capacity to appease a hungry (likely emotional) hoard of people, fast. The word ‘pizza’ appeared first in print in 997 AD in a Latin text in the south of Italy, and its continued popularity (and the reason it’s still appearing in print) is down to its ability to appease large groups of ravenous people, fast. You can’t go wrong if you serve some homemade pizzas, and Lilly Higgins’s simple simple chorizo, courgette and pepper recipe uses readymade dough to make life a little easier. For the more ambitious chef try making your dough from scratch withLiam Reid’s recipe. It includes mozzarella, chorizo, caramelised fennel and onion with rocket and parmesan. He also swears by the Smithwick’s Ale he puts in his dough. If you’re feeling really virtuous, try Domini Kemp’s low-carb pizza, made with a cauliflower base instead of dough – although this is best made in advance to let the base dry out fully.

Pasta is always a crowd pleaser. Donal Skehan’s one-pan pasta dish can be whipped up in 20 minutes. This one-pan wonder leaves you with a silky tomatoey dish without wasting time on the washing up, leaving you to get on with the important business of watching the game.

Another good one-pan dish is this stove-top lasagne – again this is low on effort and high on taste. It takes a little longer to cook, so pop it on 20 minutes before the game and it will be ready for half time.

Speaking of half time, for a quick chocolate fix , make a Nutella mug cake in the microwave while the pundits are chatting. This cooks in just one minute and everything happens in the mug, so there is minimal washing up. To make one cake, combine half a beaten egg, five tablespoons of Nutella and two tablespoons of flour in a mug. Beat until smooth. Microwave for 60 seconds. Dig in.

The Americans know a thing or two about game food – and nothing says game food quite like a hotdog. These hotdogs from Lilly Higgins come with homemade mustard and squash fries so they’re a step up from the standard ballgame fare.

Turn up the heat with a kick of something spicy we’re big fans of Kwanghi Chan’s recipe for a spice bag, a favourite of many Dublin chippers and Chinese takeaways. This recipe for a finger-licking combo of chips, chicken wings, char su pork and veggies serves 10 people, so you’ll certainly be a popular host.

Or try Lilly Higgins’ Hoisin chicken – you blitz the sauce, coat the chicken and throw everything into the one tray to bake so your attention can remain firmly on the TV. Or better yet: have your own “fake-away” with this fuss-free recipe for egg-fried rice with just enough veggies to make it healthy.

Higgins reckons her baked barbecue ribs are so messy they’re “not first date food” – which automatically earns them a place at a big get to together in front of the TV. Serve them with charred corn on the cob and lots – and lots – of napkins. Another great sharing dish is Mexican nachos. This homemade chilli recipe is delicious, served with a big bowl of tortilla chips and some guacamole. This is a great recipe for an easy make at home guacamole.

A great way to polish off this Saturday is with Vanessa Greenwood’s moreish peanut butter and chocolate brownies, which are sweet enough to soften the pain of scoreline, come the final whistle.

Beer writer Sorcha Hamilton recommends: With weather like this, every fridge, cooler and ice bucket needs to be armed with some cold ones. Here is a list of some favourites. Galway Bay’s 4.8 per cent Althea, an American Pale ale with a delicious hoppy aroma and a gentle bitterness. Or if you like something with more of a hoppy kick try Stone Barrel’s Boom, a 4.5 session IPA.

For a tasty, easygoing stout, Black Rock Irish Stout by the Dungarvan Brewing Company is a winner - it’s smooth with plenty of toasted, malty character, medium-bodied and very drinkable at 4.3 per cent.

If lagers are your thing, try Galway Hooker’s 4.3 per cent, Amber Lager. It’s got a lovely caramel smoothness and a good clean thirst-quenching crispness to cut through all that tasty food you’ll be cooking up.