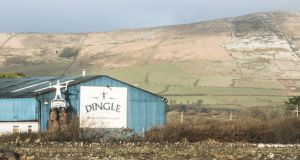 I remember visiting the Porterhouse brewery in west Dublin back in 2010 and being taken upstairs for a mystery tasting. It turned out that Peter Mosley and Oliver Hughes had distilled a few small batches of their gin and were interested in my reaction. Three years later, along with Liam Lahart, they opened Dingle, one of the first micro-distilleries in Ireland. It is also one of the very few distilleries that has never bought in whiskey to “finish” and release under their own label. It is four years since the pioneering Oliver Hughes died. Today his son Elliot runs the distillery.

“Since the day we opened, everything has been produced by ourselves and matured in a warehouse up the road,” Hughes says. “We like to say distilled, matured and bottled in Dingle.” The first cask was distilled in December 2012 and the first whiskey released three years later. In between, they established Dingle as one of the leading independent producers of gin.

The distillery has reopened, but with a maximum of 10 people instead of 25. “The town of Dingle is mad busy, but very quiet late at night. March, April and May were fairly disastrous, but June was better. A lot of independents didn’t know what was going to happen, so they ran down their stocks. Exports actually improved much more quickly than we thought.”

They had hoped to release the new Batch No 5 in time for St Patrick’s Day, but had to postpone for a few weeks. “This is a slightly bigger release than in earlier years. It is our first time with Madeira, which makes it unique. Used Madeira barrels are hard to find.”

Dingle Single Malt Small Batch No 5 is available from specialist spirits retailers for €70. As the name suggests, this is the fifth small batch release from Dingle Distillery. Each one is a unique, once-off expression. This release has been aged in a mix of former Bourbon, PX and Madeira casks. The PX and Madeira bring a luscious texture, intense raisins and other dried fruits, while the bourbon casks add a warming nose and flavour of vanilla and spice.