Food myths busted: Are coffee and salt so bad for us? Are calorie counts worthwhile?

Tim Spector, an epidemiologist, says that so much of what we’re told about food is wrong 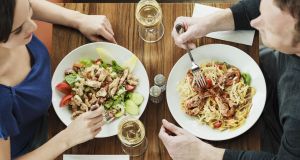 Hard to swallow: calorie labelling on restaurant menus may not be as useful as you’d expect. Photograph: Cultura/Getty

Would you automatically eat more healthily if you knew the calorie content of every meal you ate? Calorie labelling on restaurant and takeaway menus has been suggested more than once, and chains such as McDonald’s already provide such information.

But according to Tim Spector, a professor of genetic epidemiology, calorie counts on menus are flawed for a number of reasons. In his view “the calorie has been a disaster for the average consumer”.

Spector’s beef with calories is that they simply don’t add up. Calorie estimates are often less accurate than we might hope, with studies showing that “the actual calorific content of a meal can deviate 200 per cent from the number on the menu”, and the deviation is nearly always an underestimate. Even if the numbers on the menu were accurate, they would still not reflect the ways in which humans obtain nutrients from food.

Spector has conducted research involving twins, which shows that humans vary hugely in how much energy they extract from a given food. If twins are given a meal of starchy carbohydrates such as pasta, one may metabolise the meal much more quickly than the other. Another problem with calorie counts is that we digest food very differently depending on how it is processed and cooked. Corn on the cob is much more fibrous than the same corn in the form of cornflakes, yet “the simplistic calorie intake theory treats the energy gained from each as the same”.

Calorie counting is just one of many food myths that Spector sets out to demolish in Spoon-Fed, his new book: they can give consumers a “false sense of security and precision” about food. Something important that he fails to discuss is that, for a subsection of eaters, calories on a menu are actually a source of panic rather than of security. For eating-disorder sufferers, calorie counts in restaurants can trigger feelings of distress. But Spector’s point stands, which is that the human relationship with food is something far too “complex and intricate” to be reduced to calories in and calories out.

Spector wrote Spoon-Fed before the pandemic, but it covers ground that is as relevant now as ever. For weeks I had been reading alarming headlines on the link between low vitamin-D levels and an elevated risk of dying from Covid-19. But Spector’s chapter on vitamins convinces me that vitamin-D pills are not a panacea, despite the way they are being marketed. “Overuse of vitamin D supplements has been linked in several trials to weakened bone density, as well as increased falls and fractures,” Spector writes.

The book’s main argument is that to find the best way of eating we need to ignore much of what we are told. Spector’s myths include the idea that fish is always a healthy option and the dogma that “sugar-free foods and drinks are a safe way to lose weight”. Spoon-Fed is a worthy successor to Spector’s earlier bestselling book, The Diet Myth, which focused on the powerful role that the microbes in our guts play in determining our health.

This new book is broader, but he manages to distil a huge amount of research into a clear and practical summary that leaves you with knowledge that will actually help you decide what to add to your next grocery shop. He convincingly argues that coffee and salt are healthier for most people than general opinion decrees, while vitamin pills and the vast majority of commercial yogurts are less so. He is in favour of vegetables – as diverse a range of them as possible – but does not rate vegan sausage rolls as any healthier than the meat equivalent.

Why do so many people still fervently believe that margarine is healthier than butter? The great beneficiary of this belief has been not consumers but the margarine industry

Much of what we think we “know” about food is often “dangerously inaccurate”, Spector writes. One of the reasons is that, given the sheer complexity of food, it is difficult to produce high-quality scientific research on it, which leads to oversimplification. Nutrition scientists divide all foods into three simple categories: fats, proteins and carbohydrates. But this is “scientific nonsense”, Spector believes. All foods are actually a combination of proteins, carbs and fats. Moreover, a fat is not just one thing but “a vague umbrella term for anything made up of building blocks of three fatty acids joined together”.

One of the myths he identifies is the idea – which until very recently was medical dogma – that saturated fat is a major cause of heart disease. Spector notes that no study has shown that switching from a normal-fat diet to a low-fat one reduces heart disease. Another problem with the saturated-fat myth is that it encouraged consumers to switch from butter to “cheap highly processed items with multiple additives and new industrial fats that we know little about”.

Why do so many people still fervently believe that margarine is healthier than butter? The great beneficiary of this belief has been not consumers but the margarine industry. Spector shows with great clarity that “the greatest obstacle of all” when it comes to getting accurate information about food has been the food industry. Like the pharmaceutical industry, the vast multinational food companies have arguably influenced nutritionists with gifts and sponsorship. Spector reveals that industry has also funded huge amounts of nutrition research, influencing the information that we receive on everything from the safety of artificial sweeteners to the question of whether we can eat large amounts of red meat with impunity.

Many of our most unquestioned beliefs about diet suit the industry just fine. In the days when we worried about fat, they sold us a raft of highly profitable low-fat products. When we started to worry about sugar, they sold us low-sugar snacks for our children. Food manufacturers, notes Spector, “love the current guidelines based on general dietary proportions, as they give them great flexibility and distract from the steady rise of ultra-processed foods”.

If, to tackle obesity, you decide to restrict the sale of foods high in fat, salt and sugar, this could leave open the possibility that ultraprocessed foods laced with artificial sweeteners could still market themselves as healthy.

Spector questions whether breakfast really is the most important meal of the day, a line that has been most forcefully peddled by the breakfast-cereal industry

Given the endless smokescreens that seem to be put out by the food industry, it can be hard to know what to eat. Spector offers a few rules of thumb, with the proviso that our responses to food are deeply personal. He advises avoiding anything labelled as a “diet” food and especially anything containing artificial sweeteners, which, he suggests, can trick our bodies into gaining weight. He questions whether breakfast really is the most important meal of the day, a line that has been most forcefully peddled by the breakfast-cereal industry. Although he does eat breakfast himself, he notes that evidence is gathering for the benefits of time-restricted eating, where people skip breakfast and limit the time frame of their meals to six or eight hours in the day.

Occasionally, the myth-busting set-up of the book forces Spector to sound less nuanced on the subject of food than he actually is. One of the chapters is entitled “Bringing Back the Bacon. Myth: All meat is bad for us”. Yet he actually agrees that mortality is somewhat increased in processed-meat eaters, although he makes no mention of the nitrites that are considered the problematic aspect of bacon. Most of the chapter is concerned with the fact that, on environmental grounds, we should all “consider being flexitarians”, eating very little if any grain-fed beef because “meat is not essential” – not exactly bringing back the bacon.

Yet, taken as a whole, Spector’s book is refreshingly open-minded, deeply informative and free of faddish diet rules. His recommendations include subsidies for vegetables and restrictions on the voracious lobbying of the food industry.

But the greatest hope for better diets, he suggests, is in education. “We need to be teaching our children about real and fake foods with the same zeal that we teach them how to walk, read and write.” If Spector is right, then knowing how to recognise real nourishing food when you see it is a far more useful life skill than mindlessly counting calories. – Guardian

Spoon-Fed: Why Almost Everything We’ve Been Told about Food Is Wrong is published by Cape