Meet The Chef series heads north west for its next dinner, discussion and demo 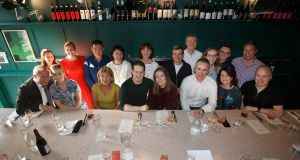 Donegal is emerging as a contender for the title of culinary capital of Ireland with all the great food that’s being created there, so the Irish Times Food & Drink Club is getting out of Dublin and heading north west to see what all the fuss is about.

The fourth in a series of Meet The Chef events – after successful collaborations with Niall Sabongi (The Seafood Café), Gaz Smith and Rick Higgins (Little Mike’s) and most recently Darren Free and Chris Maguire (Frank’s) – will take place at the Foyle Hotel in Moville, on Friday, August 30th.

Chef proprietor Brian McDermott and his fellow chefs Derek Creagh and Monto Mansour will cook a six-course tasting menu of local Donegal produce for 20 club members, as well as demonstrating how to cook some of the dishes.

McDermott’s cookery book, Donegal Table, was recently named best cookbook written by a chef, at the Gourmand World Cookbook Awards, so participants will be hearing about that and celebrating its success. In the final judging, this O’Brien Press title triumphed over a book written by Mauro Colagreco, head chef at Mirazur, a Michelin three-star in the south of France that is currently number one in the SPellegrino World’s 50 Best Restaurants list.

Between courses, McDermott will talk about his career as a chef, writing his award winning book; his experiences of building a brand in a rural setting, and the importance of community. The event will take place in the hotel’s private dining room and tickets for the six-course menu, welcome drink and cookery demonstration are €40.

Details of how to reserve a place will be included in the monthly newsletter that will be emailed to Irish Times Food & Drink Club members at 7.30am next Friday, August 9th. The newsletter will also offer members an opportunity to apply for complimentary admission to this weekend’s Wine & Cheese festival in Iveagh Gardens. The club is free to join, and the sign-up only requires an email address. You can join here.

July’s Meet The Chef event took place at Frank’s, the new wine bar in a former pork butchers on Camden Street in Dublin, where 18 club members gathered around the venue’s communal table to share a five-course tasting menu and hear from chef turned restaurateur Darren Free, and the venue’s head chef Chris Maguire.

Thanks to it being a private event, there was no two-hour wait for a seat at the table, which Free says has become a bit of a singles meeting spot, but guests did get to hear about the thinking behind the no reservations policy, the challenges involved in turning a butcher shop into a wine bar (with a little help from your dad in Free’s case), and the inspiration behind the project.

The first course of burrata, heirloom tomato and pickled onion was a crowd pleaser, and there were a lot of murmurs of approval too for the next course of whipped duck liver and preserved summer fruits, served with tiny slices of warm brioche.

Taking a break from his stovetop and work station alongside the communal table, Chris Maguire proved to a chef who can talk eloquently and entertainingly about his career and his craft. There were a few laughs too, and Maguire’s desert island ingredients were revealed to be tequila, lime, ice, a blender and an endless supply of cheeseburgers.

The main course of cod, shiitake mushroom, York cabbage and quinoa was followed by what has proved to be one of the wine bar’s most popular desserts on its ever changing menu – peach, ricotta, brown butter. Kevin Mogg, who designed the wine list for Frank’s, had lined up suggested pairings for each course, and was on hand to make sure everyone’s glass was never empty.

With 18 knowledgeable, enthusiastic and vociferous food and drink enthusiasts around the table, the Q&A sessions that punctuated the evening were lively and thought provoking, and a lot of fun.

What will happen to house prices after lockdown?
6