What’s the difference between granola and muesli?

Now We Know: Simply put, granola is mixed with a sweetener and baked whereas muesli is served raw 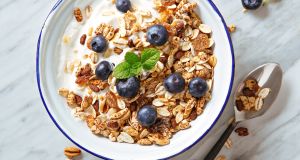 Both muesli and granola were popularised by physicians promoting alternative health in the 1800s. Photograph: iStock

There are words used in kitchens that have the potential for mix up; one might absent-mindedly say kettle when referring to a teapot, say, or muesli when one really means granola. But what is it that separates muesli and granola? What’s the difference?

Simply put, while they’re both typically made with oats, nuts, fruits and seeds, granola is mixed with a sweetener, such as honey, and oil, before being baked. Muesli remains unbaked, and can be served hot or cold. While humans have been eating gruel and porridge for breakfast since at least the Ancient Greeks, the idea of eating cold cereal is relatively new. Both muesli and granola were popularised by physicians promoting alternative health in the 1800s.

An early champion of muesli in Europe was the Swiss doctor and nutritionist Maximillian Bircher-Benner, who promoted the virtues of muesli throughout the late 1800s and early 1900s as part of his belief in the health benefits of a raw-food diet. If you’re a fan of Bircher porridge, which are oats soaked overnight in either apple juice, cream or milk, you’ve got Maximillian to thank.

Granola, meanwhile, has roots in another 19th-century sanatorium, this time in Dansville, New York. Throughout Dr James Caleb Jackson’s lifetime, which spanned 1811 to 1895, he was a farmer, an active abolitionist, a journalist, a physician and hydrotherapy evangelist. He’s widely credited as the inventor of the first dry, wholegrain breakfast cereal, which he called granula. He developed the cereal at his spa in 1863, according to Smithsonian and other sources, after experimenting with the idea the cold cereal could be part of an overall diet-led cure for illnesses.

“He baked graham flour into brittle cakes, which he then crumbled and baked again,” write Hilary Greenbaum and Dana Rubenstein in a piece called Who Made That Granola? for the New York Times Magazine. “It was not an immediate success; in fact, it was edible only when soaked in milk overnight.”

According to Greenbaum and Rubenstein, scandal struck the early development of cold cereal, when “digestive evangelist” Dr John Harvey Kellogg (yes, that Kellogg) launched his own cold cereal, developed at his sanatorium in Battle Creek, Michigan, in the late 1870s or early 1880s, which he called granula. Jackson sued, and Kellogg eventually changed the “u” to an “o” and by 1889, he was “selling two tons of granola a week”.

Granola and muesli are, of course, very simple to make at home but sometimes it’s nice to have a shop-bought box when you’re low on time or energy. Some of the tastiest Irish-made granola include Cool Jim’s Granola by The Happy Pear (happypear.ie), Maria Lucia Bakes (marialuciabakes.com) and Paddy O’s Cereals (granola.ie).