Chef Anthony Bourdain to be remembered on his 63rd birthday

The chef and writer died a year ago. He is celebrated on #BourdainDay, June 25th 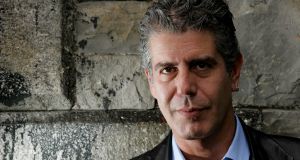 June 25th, 2019 would have been Anthony Bourdain’s 63rd birthday. But the American chef, writer and TV presenter took his own life in a hotel bathroom in rural France on June 8th last year, so, instead, tomorrow will be Bourdain Day, a celebration organised by his chef friends José Andrés and Eric Ripert.

The pair announced the initiative on Twitter last month. Ripert, the New York-based French chef who co-owns the Michelin three-star Le Bernardin, was travelling with Bourdain in Alsace, on location for Bourdain’s CNN TV series Parts Unknown, at the time of his death. Andrés, a Washington-based Spanish chef with a string of restaurants across the United States, is known for his humanitarian work providing meals for people in places affected by natural disasters.

The pair are encouraging fans of their late friend to post their memories of him on social media on Tuesday, using the hashtag #BourdainDay. “June is a very important month,” Ripert says in the Twitter video that announced the initiative. “On June 25 we are all going to celebrate the birthday of our dear friend and beloved Anthony Bourdain.”

Last week the Culinary Institute of America, where Bourdain trained as a chef, graduating in 1978, announced the creation of an annual scholarship, to support chefs wishing to study abroad.

In May CNN published a book of photographs, Anthony Bourdain Remembered, compiled from footage of his travels for Parts Unknown, with quotes and stories contributed by his friends, colleagues and fans. A documentary of his life is in the early stages of production by the network.

Food on the Edge, the Irish symposium of chefs, which attracts attendees from all over the world, dedicated its annual event in Galway last October to his memory.

At irishtimes.com, Anthony Bourdain Week runs until Friday, with recipes, features and archive material celebrating the chef’s contribution to the food and travel worlds.

Today you’ll find his wise, wry words on the not-to-be-underestimated skill involved in making the perfect omelette, and tomorrow, on #BourdainDay, we publish an exclusive extract from his final book.