Does Donnybrook need another pub?

Restaurateur Oliver Dunne thinks so, as he opens a gastrobar in the Dublin 4 village 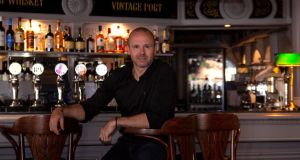 The Donnybrook: Oliver Dunne at the Dublin 4 gastropub, his latest opening

The restaurateur and chef Oliver Dunne has relaunched the former O’Connells in Donnybrook as a gastropub – called, simply, the Donnybrook – more than a year after taking over the lease.

The new venture, on the corner of Morehampton Road and Belmont Avenue in Dublin 4, is his first move into the pub trade – the business is split equally between a 50-seat dining space and a traditional bar – and is, he says, “a concept that I’m learning, and that I’m adjusting to, because obviously I am a restaurant guy”.

Dunne also owns the restaurants Bon Appetit, in Malahide in north Co Dublin, Cleaver East, in Temple Bar in Dublin, and Beef & Lobster, which has branches in both Malahide and Temple Bar. Next month he will open his first restaurant outside Dublin, when he brings Beef & Lobster to Galway.

Diners and drinkers will notice little structural change to the Donnybrook premises, which was Madigan’s pub before it became O’Connells – when Tom O’Connell, Darina Allen’s brother, ran it as a restaurant – although it has been given a new, brighter colour scheme.

“It is a big open space, and so we didn’t feel the need to change anything,” Dunne says. “The space is really comfortable; when I sit in it I feel I can kick back and enjoy a few drinks with my friends. I feel I have achieved what I wanted.”

The room naturally splits into a dining space – almost full on Thursday evening, with lots of family groups – and a much quieter bar area. A function room upstairs is being renovated and will open next month.

“In Ireland we’ve really struggled with the gastropub concept,” Dunne says. “In Ireland I don’t know of any gastropub that I would really consider as a restaurant. I want it to be a place where you can come in for a few drinks with friends after work or at the weekend and be perfectly comfortable doing that, and not feel that you’re doing it in a restaurant, and likewise you can come in and have a sit-down meal, or a date-night dinner.”

Having taken a long lease at the start of 2018, Dunne initially continued to operate the premises as O’Connells, honouring tour-bus catering contracts mainly, until those expired, in November. “At that stage it was too close to Christmas to start on anything new, so we did a pop-up, Decemberfest, just to fill that two-month void.”

Christmas-party drinking is one thing, but does Donnybrook really need another pub? The shutters came down on Kielys, the landmark pub just across from the Donnybrook, this year, and there are suggestions that another licensed premises in the vicinity may close soon.

Dunne is hopeful. “Yes, I think so. Since we’ve been open, every second customer that walks in says, ‘Thank God. We are delighted something has opened. There’s nothing in the village since Kielys closed.’”

The food menu is a one-page, crowd-pleasing selection of fairly standard dishes, elevated by the use of modish ingredients and a few cheffy techniques – definitely more restaurant fare than pub food.

Fish and chips? Of course, but the catch of the day comes tempura-battered, with sea-salt chips and charred lemon (€18). The burger has Gruyère cheese, truffle mayo, red-onion ketchup, rocket salad and fries (€15). And, yes, there are steaks – dry-aged and grass-fed beef – keenly priced, like the burger, at €19 for a 12oz striploin and €23 for a 10oz fillet.

Chicken wings are glazed with black garlic, soy and white miso (€10), and the pasta dish is linguini with white clams and Mexican chorizo (€16). The vegan option is red-pepper-and-basil spaghetti with spinach and ginger-pickled chilli (€14). At weekends, brunch dishes and roasts will be the draw. Lunchtime sandwiches include an old-school cheese-and-ham toastie.

At the bar, craft beers have been selling so well, Dunne says, that the selection is to be expanded, and guest casks introduced. The one-page cocktail and wine menu has a good selection available by the glass. Television sets will screen rugby and soccer matches but will not be visible, or audible, from the dining space, and there are plans to add music sessions.

Luis Ferreira, who has been with the Oliver Dunne group for 10 years, has been drafted in as general manager, and the gastropub will open seven days a week, from noon on weekdays and from 10am at weekends. The pub licence allows the bar to open until 2am. The Donnybrook has not yet been staying open that late, “but the option is there”, Dunne says.

Want to avoid the wonky first pancake? Here’s how ...
7