Can boozy food take you over the limit? I used tiramisu, trifle and a breathalyser to find out

A study is warning that consuming some foods can make people unsafe to drive. But how risky are they really? 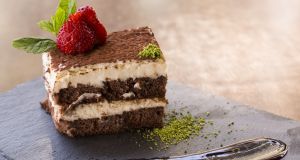 Motorists have been warned to monitor what they eat, after a new study has revealed that certain food items can push them over the legal drink-driving limit. But can they? In the spirit of bold investigative journalism, I bought a breathalyser and a ton of pudding and set to work.

My starting blood alcohol level was less than 0.2%.

Phase one
According to the study, two pints of orange juice can often push you close to the Irish drink-driving limit of 0.5% blood alcohol concentration (or 50mg of alcohol per 100ml of blood). The alcohol in OJ is produced as the oranges ferment. I chug back a 950ml carton of Tropicana Pure Premium smooth juice. I am full, but not drunk. My blood alcohol level remains unchanged.

Phase two
Two portions of tiramisu supposedly contain enough alcohol to get you in trouble. Still full of juice, I wolf down two individual 90g servings of Iceland’s Dolce Mamma tiramisu, which are labelled “alcohol degree 1.8%”. My blood alcohol leaps up to 0.4%, but I’m still legally allowed to drive.

Phase three
The report suggests that a whole bottle of hot sauce can also tip you over the limit. I buy 148ml of Frank’s RedHot Original and gulp back as much as I can. Sadly, it only takes one big mouthful before I’m sweating and retching enough to give up. And it actually causes my blood alcohol level to drop back to the starting point. This is because, I discovered, hot sauce only counts if it is made with bourbon, which this is not. All of this was for nothing.

Phase four
A family-sized cherry trifle often contains about 100ml of cherry brandy. I couldn’t find any cherry trifle locally, so I bought the next best thing: five 150g individual Marks & Spencer luxury sherry trifles. After two, I feel sick. After three, I have to let giant wads of custard sit on my tongue for minutes at a time before I can summon the enthusiasm to swallow. After four, I’m still good to drive but can actively feel gout kicking in. I leave the fifth in the knowledge that it would definitely make me vomit. It is 11.22am and I hate myself.

Phase five
I have to make myself unsafe to drive. I have to, or else I will have consumed all these thousands of calories for nothing. It is time to bring out the big guns: 25 M&S chocolate liqueurs. I am not hungry. The thought of eating anything else genuinely repulses me. But I pull myself together and slowly force down three whisky liqueurs, two mai tai liqueurs and a mojito liqueur before I blow into the Breathalyser. It bleeps a warning. Success! I have finally eaten enough to be unsafe to drive. Which is regrettable, because at this point I could probably do with getting myself to a hospital. – Guardian