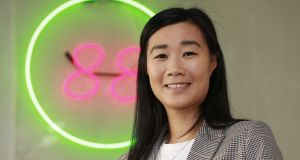 Emma Luk, owner and chef at Double 8, a dumpling restaurant in the Village Arcade in Bray, Wicklow. Photograph: Nick Bradshaw / The Irish Times

“My mum packed my school lunch and I used to bring in fried rice,” says Emma Luk, owner of Double 8 dumpling restaurant in Bray, Co Wicklow. “People would be very curious about what was in it – they’d all have ham sandwiches.”

Luk is sitting in her new restaurant, a small, open-plan space in the Village Arcade. Opening Double 8 was a big leap from the world of tech; she worked in Facebook, Google and Salesforce for almost a decade.

This is not her first foray into food, having grown up in her father’s now-closed Chinese restaurant in Bray, where she played chasing in the kitchens. Every summer, the family travelled to Hong Kong, where her parents are originally from, for the school holidays.

“When I was a teenager, I felt like I missed out because there was Irish college and French college, and I was in Hong Kong. But in hindsight, it was great,” she says. “I got the opportunity to travel to Shanghai and Japan, and tasted food there.”

There has been a change in Ireland in the past 20 years in how people perceive and understand Chinese food, Luk says, and how willing they now are to try more authentic or experimental dishes. When she was a child, a school friend asked why Luk was not overweight if she only ate Chinese food. But in authentic Chinese home cooking, Luk explains, “everything’s pretty much just steamed”.

As Chinese immigrant parents who opened restaurants, they don’t necessarily want their kids to be in the industry... It’s tough in comparison to doing an office job.

Luk learned to cook at home. Every Chinese new year, the family would gather to make traditional dumplings. Her restaurant menu now features three savoury dumplings, and one sweet, with some authentic fillings and some which she has created. There’s a pork and cabbage dumpling, which she recommends eating with a sprinkling of Chinese vinegar, and a kung po chicken dumpling in a “spice bag” wrapper. She has also married Japanese influences with Shanghai-style dumplings, in a teriyaki shiitake mushroom and silken tofu triangular parcel.

Double 8 is Luk’s first bricks-and-mortar outlet, following her experience with a friend running Triad, a weekly food-market stall selling homemade dumplings and ramen. Working five days a week at Facebook, and spending weekends cooking was energising, she says. “I get a thrill from people eating my food and saying it’s good.” When other opportunities arose for her business partner, they decided to close Triad. Luk put all her energy back into her weekday job, but “it just wasn’t the same”.

In 2018 she began to consider opening her own place. Her family have been supportive of her career transition from tech to food, despite initial reservations. “As Chinese immigrant parents who opened restaurants, they don’t necessarily want their kids to be in the industry,” she says. “It’s tough in comparison to doing an office job.”

Why open in Bray, and not in Dublin city centre? “I really love this place,” she says. “The community here, all the places in the lane and on the seafront – a lot of food places and innovative shops – I think it’s a hub.” Rents are also prohibitively high for independent food businesses starting out in Dublin, Luk says. “You’re up against a lot of groups that have a lot of different places to spread their risk. To compete with that is hard as a small business.”

For now, Luk’s hands are full with running Double 8; she processes all the orders and collects ingredients from distributors, prepares the fillings and dumpling wrappers, and does all the cooking, book-keeping and administration.

The restaurant has already acquired some dedicated regulars, and frequently sells out of dumplings. In the future, Luk hopes to expand to Dublin city centre, and hints at a dream to open a dumpling-making cookery school some day. “I know I can do this.”

1 Wash and shred the Napa cabbage. Add to a large bowl and generously sprinkle with salt. Rest for 10 minutes.

2 Squeeze out and try to remove as much moisture as possible from the cabbage.

4 In a separate bowl combine soy sauce, sesame oil, Shaoxing wine. Add this to the pork and cabbage mixture and mix well.

5 Set aside in fridge for one hour to allow flavours to develop.

6 Place a dumpling wrapper in the palm of your hand. Take a teaspoon of the dumpling filling and place in the middle. Lightly moisten the inside of the wrapper where it will seal. Fold the wrapper and pinch closed.

7 Pour a drizzle of oil to coat the bottom of your frying pan. Allow the pan to heat up to a medium/ high heat.

8 Place dumplings into the pan.

9 When the bottoms of the dumplings are browned and crispy, add enough water to half cover the dumplings and place the lid on immediately. Be careful during this process as oil and water are not the best of friends.

11 Remove the dumplings from the pan and serve with Chinese vinegar (the traditional way) and/or soy sauce .