But it won't be available here until September. Meanwhile Irish teenager reaches final three with a new variation on the classic chocolate bar 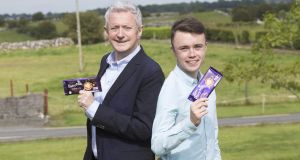 Cadbury has launched a Dairy Milk chocolate bar with 30 per cent less sugar than the original. It is the first change to the original recipe since it was introduced in 1905, and is in response to the UK Government’s plan to reduce the sugar content of snacks and sweet treats by 20 per cent by 2020.

The new bar went on sale in the UK on Wednesday, but it will not be available in Ireland until September. According to Cadbury owner Mondelez International, more than 20 scientists, nutritionists and chocolatiers have spent three years working on the revised formulation, which it describes as “the most significant innovation in the brand’s history.”

All of the original formulation, eight-square sized Dairy Milk bars for the UK and Ireland markets are made at the Cadbury plant in Coolock, with fresh milk sourced from farms in Ireland and the UK. It was announced in May that up to 70 jobs were to be lost there, as part of a restructuring plan also involving investment of €15 million in new technology designed to bring efficiencies to the manufacturing process.

However, the new Dairy Milk bar – “It’s not diet, it’s 30 per cent less sugar” – a Cadbury UK press representative corrected enquiries from The Irish Times, is currently being manufactured “in Europe”, as the company is “still running test trials for this initial launch”.

More fibre has been added to the bar to replace the reduced sugar content, and there are no artificial sweeteners used. The sugar content in the new bar is 39g per 100g, while in the original it is 56g per 100g. However the calorie content of the two bars is similar. The original has 534 calories per 100g while the new variation has 503 per 100g.

Rose Costello, writing about the original Dairy Milk chocolate bar in her food labels series in The Irish Times, notes that sugar is the second listed ingredient, after milk. “Sugar adds up to half of the finished product, but that will be because there is sugar in the form of lactose in milk too.”

In other Cadbury news, an Irish teenager is one of three finalists in a UK and Ireland competition to find a new spin on the classic Dairy Milk. Callum Clogher, a 17-year-old Roscommon student, has reached the final stages of the Cadbury Inventor competition with his suggestion for a choca-latte bar, based on coffee, cream and vanilla combined with milk chocolate.

The other finalists, both based in the UK, have designed Dairy Milk variations based on raspberry and white chocolate, and on orange and caramel. The competition will be decided by the public and you can cast your vote here. The bar that receives the most votes will go into commercial production. Voting is open until July 29th and the winner will be announced in September.