How to eat in a heatwave: keep it chilled

But that doesn’t mean unlimited Magnums 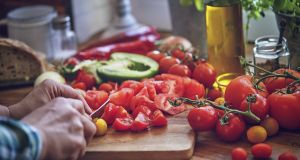 Appetites change during periods of hot weather, with salads being a popular choice of sustenance. Photographs: iStock

You know all those wonderful things a heatwave will do to a landscape? Obliterating flaws, flattening tedium, idealising the quotidian with sudden contrasts? Well, it does the opposite to food. You are not hungry anyway, so that doesn’t help. Almost all meat starts to look sweaty and botulistic.

Salami is the worst, its fat sweating while its edges crinkle. Salads look limp, fish looks dicey; even chips become daunting. Everything smells different in the heat; things that should be appetising are a bit nauseating, and that’s even without the soapy sunscreen upper lip. Only flies actively enjoy eating in the heat.

So, what should you have, just to stay upright? Don’t say a Magnum. Young people are obsessed with them, but this is not a legitimate adult food. You can solve a lot of those texture problems by concentrating on soup, which also saves on having to chew.

Gazpacho remains the ace in the hole of the cold soup; it is not unusual in a hot climate to put some ice in it, although I dispute that – on purity grounds – as trenchantly as I would putting ice in a glass of white wine.

The go-to recipe always used to be the one in Almodóvar’s movie Women on the Verge of a Nervous Breakdown – tomatoes, bread, garlic, barbiturates etc – minus the drugs. Or with them, if you’re really suffering in this heat.

Originally, gazpacho didn’t feature tomatoes: just water, bread, vinegar and garlic, like a person trying to make a meal just from the cruets on the table of a taverna. Anyway, don’t worry about that – it sounds disgusting. Add a ton of very ripe tomatoes, a red or a green pepper, some cucumber and cumin and you have an actual meal. If you want the sensation of ice but, like me, despise it, freeze some grapes and drop them in.

Chez Bruce, the London restaurant that was good before any other English restaurants were, does a green gazpacho that is a lot more cucumber-heavy, with peeled (although not frozen) grapes at the bottom. I am not wild about fruit in savoury food, but I found the effort endearing. That’s what you appreciate in food: the taking of infinite pains.

Other cold soups to consider: pea and mint – I wouldn’t normally endorse a cold pea soup, given how delicious it is hot with ham, but somehow the mint makes the temperature OK, because it reminds you of a drink.

Vichyssoise, that thick soup made of boiled and pureed leeks, onions, potatoes, cream and chicken stock, is better cold than hot, but you have a stodge problem. Potatoes sit surprisingly heavy.

My mother has a vast repertoire of nut soups – almond with harissa, walnut … they are magnificently expensive to make and unbelievably disgusting to eat. Never do this. Still in the category of cold things, very cold melon is the staple of hot climates. If you keep a watermelon very cold, your cat can sit on it until you eat it (see Twitter). And, if you chill a honeydew, you are allowed to drink port with it, for some unknowable reason or other.

The old saw about eating hot food and drinking hot drinks in a heatwave has some truth in it, although for different reasons. Very spicy foods don’t cool you down, but they give you confidence because of your gut sense that the chilli has antibacterial and/or preservative qualities, which is true.

Hot drinks cool you down by making you sweat, so even a cup of tea will do. But it is pointless sweating unless it can evaporate, so if you are somewhere hot and humid, don’t bother, nor if you have too many clothes on, nor even if you’re already sweating so much that it’s just dripping off you.

Plus, it is not your organs transmitting the information, it is the sensors inside your mouth and throat. I pass that on merely to underline that someone, somewhere (the University of Ottawa) has done the research on this. Of course, you could wait to eat until after the sun goes down, if you have the backbone. Remember that it is not the end of the world not to eat if you’re not hungry.
– Guardian.

If you want to put a spin on the traditional Spanish gazpacho, here is Domini Kemp’s recipe for an Asian version, based on coconut milk.