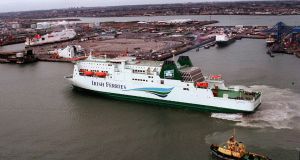 The Government is putting in place contingency plans for Irish ports in the event of a no-deal Brexit. Photograph: Eric Luke

Rosslare and Waterford ports could take spillover freight traffic from Dublin Port should the State’s main seaport suffer delays from new customs after Brexit under no-deal contingency plans being considered.

More than 80 per cent of freight transport crossing the UK “landbridge” between the Republic and continental Europe passes through Dublin Port due to the frequency and speed of sailings to Holyhead, Liverpool and Heysham.

As part of contingency planning by government departments, the possibility of Rosslare Europort, which is operated by Iarnród Éireann, being used to take freight traffic from Dublin is being assessed if the UK crashes out of the EU without a deal, and customs checks result in a major backlog of traffic at British ports.

Mr Culligan put excess capacity on the twice-daily sailings operated each by Irish Ferries and Stena Line between Rosslare and Fishguard and Pembroke in Wales at between 30 per cent and 40 per cent.

Rosslare had, he said, received an approach from another shipping company, already serving routes between Ireland and the UK, to consider another possible service post-Brexit should there be a backlog in Dublin. He declined to identify the company.

“There is extensive planning under way, and options are being considered by the government departments as to how to keep supply chains flowing,” Mr Culligan said.

Management at the Port of Waterford has said it has capacity to treble or quadruple the amount of lift-on, lift-off (Lo-Lo) freight that it handles every year should a hard Brexit lead to strains on the flow of traffic through Dublin Port.

“It is pretty well understood within the industry and the Government that Waterford and Rosslare have capacity and can take a little bit extra traffic without any great strain,” said Frank Ronan, chief executive of the Port of Waterford.

He sees Waterford, a lo-lo port, possibly being used more for direct services from Ireland and Europe bypassing the UK fully by using ports such as Rotterdam, Antwerp and Le Havre in France.

He said a UK ferry service tended to be preferred by roll-on, roll-off (Ro-Ro) lorries and other heavy goods vehicles because it was shorter.

A spokesman for the Department of Foreign Affairs declined to comment on specific no-deal planning regarding ports in the southeast.

The Government had intensified contingency planning in light of the political divisions in London over the Brexit deal. It plans to publish details on Thursday.