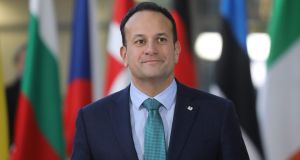 The Taoiseach has said that he and the rest of the EU are willing to help British prime minister Theresa May by offering “explanations, clarifications, [and] assurances” on the Brexit deal, but said that the Border backstop enshrined in the accord “is not on the table” for discussion.

After a “very long meeting” with Mrs May in Brussels on Thursday, before a meeting there of all EU leaders, Mr Varadkar strongly reiterated that the agreement on the UK’s withdrawal from the EU would not be reopened.

Mr Varadkar’s comments came a day after Mrs May survived a confidence vote among MPs from her own Conservative Party, which was called amid concerns over the Brexit deal, particularly in relation to the backstop provision.

The backstop is a default option to avoid a hard Border in Ireland after Brexit, unless and until alternative arrangements covering the issue are made.

Mrs May had earlier cancelled a planned vote in the House of Commons on accepting the Brexit deal as the motion faced almost certain defeat.

“The deal we have is the only deal on the table,” Mr Varadkar said, echoing a line that every European leader has repeated on their way into the summit in Brussels on Thursday afternoon.

He said he hoped the deal could still be ratified in the coming weeks.

“When it comes to the assurances that prime minister May is seeking,” he said, “the EU is very keen to offer explanations, clarifications, assurances, anything that may assist MPs to understand the agreement. And hopefully to support it. But the backstop is not on the table.”

Asked if those assurances should be legally binding, Mr Varadkar said: “I don’t think we could agree to anything that would change the content of the treaty, so we’ll have to work out exactly what those assurances are . . . But what I can say is that the backstop is not on the table.”

Mr Varadkar reiterated that the UK could take away the threat of a no-deal Brexit outcome by withdrawing from or pausing the article 50 exit process.

He said that he had “certainly discussed some ideas” with Mrs May about what clarifications or assurances would assist her in passing the treaty through the House of Commons, but said he would prefer not to discuss specifics in public. He added that there was “nothing in writing”.

Pressed as to whether Mrs May’s proposals at the meeting were acceptable, he said: “I have to say, some of the suggestions she made made sense – others I thought were difficult.

“But what I said unequivocally is that we wanted to be helpful, we want to help this deal over the line, we’re willing to talk about explanations, clarifications, statements explaining what the deal means, but we couldn’t have anything that contradicted what’s in the deal. Because that would mean reopening the withdrawal agreement and the entire European Union is unequivocal that this deal could not be reopened.”

He added that it should be possible to assure the British government that an agreement on the future relationship between the EU and the UK could be negotiated quickly.

He said that if the backstop was invoked, it need only be for a short period of time. However, he stressed that the provision could not be time-limited.

“If the backstop has an expiry date, if there is a unilateral exit clause, then it’s not a backstop . . . and that would mean reopening the substance of the withdrawal agreement and the EU is unequivocal that’s not happening.”