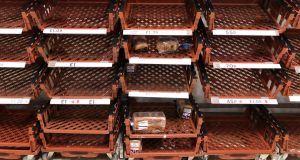 Pat The Baker and Old Mr Brennan have expressed hope that the widespread panic-buying of bread ahead of and during the so-called “Beast from the East” in Ireland last week will see a long-term resurgence in the popularity of the old-school sliced pan.

The chief executive of Longford-based Pat The Baker, Declan Fitzgerald, admitted the bakery had been taken by surprise by the panic-buying, as it started “a lot earlier than we would have expected and there were people stocking up on bread as early as Sunday evening”.

He suggested that fears of a status red weather alert combined with a social media whirl had led people to start stocking up on bread days before the storm actually arrived.

“Both the traffic light warning system and Twitter are relatively new phenomena,” he said.

He said that, after years of what he described as negative press, bread had once again proved its worth in Irish society. “I have to say I found it amusing to see all these young people in my local supermarket coming in and asking where the bread aisle was.”

He said it was both “a great week for us and an average week for us when you take out the days shops were closed”.

He added: “People didn’t buy extra bread, they just bought it over a shorter period of time. People did overbuy for sure. And we don’t like it when that happens. It means the bread goes longer without being eaten and that’s not good for a brand” – particularly a brand that claims to be “so fresh it’s famous”.

A spokesman for Brennan’s Bread said its loaves had “got to most places on most days apart from Friday”, when they couldn’t do any deliveries.

“People in Ireland love their bread and they miss it when they can’t get it, and everything we could get on the shelves was just gone.”