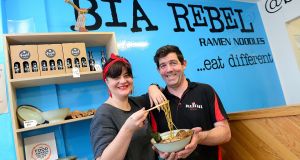 Brian Donnelly and Jenny Holland are bringing Bia Rebel, their ramen shop in Belfast, to west Cork for a month-long summer residency. From Monday, August 5th until the last day of the month, the couple will have their Airstream food truck parked up in Ballydehob, alongside Levis’ Corner House and near the Michelin-starred Restaurant Chestnut.

They may be best known as winners of best cheap eats in last year’s Observer Food Monthly awards, but Donnelly and Holland are using their time in Cork to expand their repertoire beyond ramen.

“Every day in Ballydehob, our Bia Rebel food truck will offer four or more dishes that will change daily, along with two classic homemade noodle dishes to please the ramen junkies, plus food from the charcoal grill – like butterflied prawns cooked over coals, topped with cultured butter,” Donnelly says.

A new dish Donnelly has developed for the residency is a lamb sloppy joe, with lamb and crunchy veg flavoured with cinnamon, cumin, Szechuan pepper and coriander, topped with peanut butter sauce and served in a soda bread bun.

Donnelly, a classically trained chef, is also planning yakitori evenings “using absolutely every top to tail part of, for example, great local chicken, in a dining-on-sticks approach that will suit the casual vibe of Levis’.”

The Bia Rebel food truck will be open in the back yard at Levis’ Corner House, Ballydehob, Co Cork, every day from August 5th-31st, from 5pm.

The Simply Better Ibérico rack of pork that went on sale in selected branches of Dunnes Stores recently, has arrived in Ireland in a blaze of glory, winning a three-star gold rating from the Great Taste Awards, announced this week.

The selection of free range meat, which also includes “presa” – steaks cut from the shoulder of the famous black pigs – and fillet medallions, has been sourced from the Valencia family firm, Redondo Iglesias, which also supplies the Simply Better at Dunnes Stores brand with Spanish charcuterie.

Is rum the new gin? There certainly seems to be a new focus on the sailors’ favourite spirit in recent weeks. Bacardi has launched raspberry and ginger flavoured variations on its rum, and they come with helpful serving suggestions.

They recommend mixing the raspberry one with lemonade, although if you want to turn it into a fancy cocktail you can combine it with raspberry cordial or puree, lemon juice and tonic water, served over ice, for a raspberry Collins. The ginger version, made with golden rum and fresh ginger, pairs well with pineapple juice and soda water.

At Lemuel’s bar at Dublin’s Conrad hotel, Thursdays, from 6pm, is rum time. Cocktails made with the spirit are on offer for €10, and there are selection of rum desserts such as mojito panna cotta, or Like a Piña Colada (coconut mousse, pineapple and star anise compote), for €9. Thursday rum nights continue until September 30th.

Bursary on the banks

Chef and restaurant owner Ross Lewis is sponsoring the Chapter One Student Bursary, covering full fees for a student to embark on the two-year postgraduate diploma in Irish food culture which commences at University College Cork this autumn. Lewis is an alumnus of the college, having studied dairy science there, and the value of the bursary is €6,000.

This new course is research based and the areas of study will include food and culinary history, food and folklore, food and creative practice, food and literature, nutrition and health, food and the environment, sustainability, food policy, and the contemporary Irish food system. For details of how to apply, see ucc.ie/en/ace/chapteronebursary/.

There is also an additional opportunity to apply for funding for this course through the college’s Sanctuary Scholarship initiative which is open to asylum seekers and refugees who meet the entry requirements.

The terrace at Wilde, the restaurant upstairs in Dublin’s Westbury hotel, has turned into a floral oasis in the city with the launch of Art of the Wilde, a collaboration with Perrier-Jouët to mark the launch in Ireland of its Blanc de Blancs champagne.

Artist and fashion designer Helen Steele was commissioned to design an exuberant floral artwork to be used on menu covers, to present a new summer menu from executive head chef Sandeep Singh. This features à la carte dishes to pair with a flight of Perrier-Jouët champagne. The flight (€39) begins with a flute of Grand Brut, followed by Blason Rosé, and then Blanc de Blancs.

The Art of The Wilde menu and champagne flight is available every day from 12.30pm until the end of August.