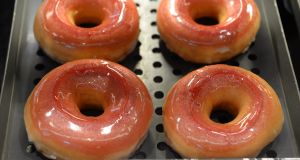 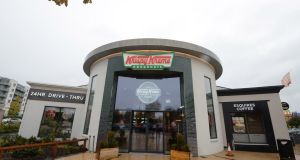 Ireland’s only Krispy Kreme doughnut shop had 600,000 customers and sold about 6.6 million doughnuts in its first year, making it the brand’s most successful store opening internationally, the US confectioner has announced at the end of its first year trading in the Blanchardstown Centre.

The US doughnut brand, which has more than 1,300 stores in 31 countries, opened its Irish outlet on September 26th, 2018. It quickly received huge attention on social media, prompting queues of people and cars from early morning and giving rise to local gridlock that was likened to Christmas shopping.

The Dublin shop has sold more than 2.3 million “Original Glazed” doughnuts since it opened – one every two minutes – and its most popular buy was its “dozen box”.

Alex Drysdale, Krispy Kreme country director Ireland, says the year has been “truly remarkable for the brand”. “I speak for the entire team at the store when I say a big thank you to all our customers for making it a year to remember.”

The shop is selling a limited-edition birthday “Original Party” doughnut (€2.45, Thursday-Sunday), has party bags for its first 365 customers on its birthday, Thursday September 26th, and a free Original Glazed doughnut for customers (with photo ID) sharing its birthday on social media.

My days of eating meat at every meal are over
3

Conor Pope: At 19km/h, I have never felt less like an athlete
6