Core values: Sweet and savoury recipes to make the most of apples

Abundant at this time of year, delicious, healthy apples can be used in both sweet and savoury dishes 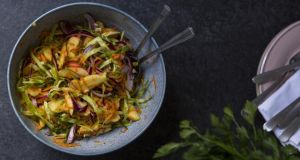 I have set myself a task of using the first Saturday of every month to focus on a single seasonal ingredient. It being November, I’m starting with apples

I love an ingredient that can be used at every meal – that has versatility and an unrelenting appeal. That’s why, this month, I’ve chosen apples (as well as for their health benefits). This time of year, I use them as much as I can. I can safely say I’ve ever heard someone say, “I don’t like apples”, especially those of the crisp juicy variety.

We are well into apple season at this stage and it’s a season of abundance that must be taken care of. If you’re lucky enough to be given a gift of home-grown apples, receive them with joy as they can be used in many ways – simply, like juices and purées or, more comforting, slow-cooked in butter and finished off with a little apple syrup, honey or sugar (see recipe below). Buttered apples freeze very well and can be used to accompany savoury dishes such as pork, ham and game as well as to add a bit of luxury in the form of dessert to conclude your meal.

The difficulty – once again – lies in choice. With so many options of what to do, do you chose to simply bake them and have them in your sitting room cupboard to offer to visitors as Miss Bates did in Emma, make apple meringue pie for a dinner party, apple and date chutney to go with cheese or just an old-fashioned apple pie to have with a pot of tea in the afternoon.

Last week, I was in France staying with friends and I made the apple and cabbage salad below to go alongside a dish of local sausage and pulses in a mustard sauce. Afterwards, my host proclaimed she would now drop bagged salad leaves from her shopping list during the winter months in favour of shredded cabbage and apple.

Another reason to grab that basket of apples with glee is that untreated and unwaxed apples offer huge health benefits to us as the skin carries good bacteria for our gut. Along with that, there are a long list of other health benefits to prove the proverb, “An apple a day keeps the doctor away”.

I have many a proud moment when I look at my kitchen shelf and see all the wonderful Irish apple products I cook with – since opening Good Things, I have religiously used Con Trass’s apple cider vinegar for dressings, his cider and apple juice for soups, sorbets and sauces. I take a shot of Rebel Foods Cider Vinegar first thing in the mornings in warm water: the benefits are endless – it increases metabolism and cuts sugar craving. Longueville apple brandy has replaced Calvados in many of my dishes. At the moment, I’m using Llewellyn’s Apple Balsamic to dress cooked beetroots for our seasonal salad. Every year brings something new and exciting in the food world and this year Highbank orchard syrup has replaced maple in lots of my recipes. I find I use it instead of sugar to caramelise nuts and seeds to go with ice creams and with butter to caramelise fruits.

“Always work with what you have” is my mantra and I try to keep that in mind as I feed my children, my customers and my friends. It’s truly important we remember the delight that can be found in simple ingredients with nothing more than a creative mind and some careful planning. It’s easy to forget that ingredients that we deem as common, or the norm, can in fact be splendid and exotic if we embrace their versatility. When is an apple not an apple? When you make it so.

Method: Place oats, water, milk, banana and salt in a saucepan and bring slowly to the boil over medium heat. Reduce the heat and cook for 10 minutes, stirring often. The banana should almost dissolve. Remove from heat and let the porridge stand, covered, for two-three minutes before serving Add more liquid to suit your taste.

To serve, spoon porridge into two bowls, top with buttered apples and syrup.

Method: Place butter in a frying pan and melt over medium heat. Add the apples and sprinkle with sugar or syrup. Cook gently until the undersides of the apples are pale golden. Turn the slices over very gently, to avoid breaking them, and cook until golden and translucent. Serve warm.

Tips: If you have a glut of apples, pan fry them as above in batches and freeze them in portions and use them when needed.

If you are not a fan of banana just leave it out, but if you are on the fence, give this a try.

Leek and apple soup with cheese and bread

Method: Prepare the leeks and chop finely. Warm a saucepan and add some olive oil. Cook the leeks until soft and not coloured. Season well with salt and pepper. Cover with a lid and put on the lowest flame to help with the cooking.

Core and chop the apple, add to the leeks, along with the bay leaves and the stock. Bring to the boil and turn the heat down to a simmer for 10 minutes. Toast the bread on both sides and place on the top of the soup followed by the cheese. You can serve as it is or place under a hot grill until the cheese starts to bubble.

Tips: You can double this recipe and have the soup as a main course. Replace the apple with pear and use blue cheese on the top.

Method: Mix the sliced cabbage, onion and apples together with the grated carrot in a large mixing bowl. In a liquidiser or a jam jar with a secure lid, add in the cider vinegar, mixed spice and a little salt and pepper. Whizz it up or shake very well. Now add some olive oil to taste and give it another whizz and taste again. You might need to add more oil and/or seasoning here to get it to your taste. You want your dressing to be sharp with vinegar so when you mix it into the salad it’s strong enough to hold its edge. Leave the dressing to stand for a few minutes for the flavour to develop.

In the meantime, toast the pumpkin seeds in a dry pan. While the seeds are still very hot add, to the salad along with the dressing and mix well.

Tips: This salad works great on its own or as a side with baked potatoes, any pork dish or baked ham. It’s important to add the toasted seeds while they are hot to the salad as this is when the magic happens and the sound is good as well!