One epic fish dish, one everyday: creamy gratin; and seared with olives and capers 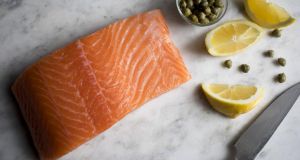 Yotam Ottolenghi’s salmon: capers and lemon find their way into both a simple recipe and a more complex one. Photograph: Andrew Scrivani/New York Times

Recently, I have been spending time simplifying some old recipes.

“Not everyone has a couple of hours to spare in the kitchen on a school night,” my sister once said to me, voicing a familiar complaint about the time commitment demanded by some of my dishes.

“I know, I know,” I said, and offered my standard response. “But, hey, when you get to taste them – it all makes total sense, right?”

“I guess so,” she conceded, with a lack of conviction reserved for family members.

I’ll be offering recipes you can whip up without breaking your back or your bank balance, as well as variations that will be more involved, special-occasion dishes

Even if I try to let such grievances glide like water over my proverbial duck’s back, they do make me ask myself about the circumstances under which people cook. Is there a way to deliver the impact I like my food to have – surprising, complex, bold and, of course, delicious – without having to put together 18 ingredients and set aside the two hours my sister can’t spare when cooking for her family? The short answer is yes, but there is more to it than that.

Next week I’ll be offering recipes you can whip up quickly without breaking your back or your bank balance, as well as several variations that will be more involved, special-occasion kind of dishes, in which you’ll happily invest time and resources.

My focus today is salmon. I am taking inspiration for these two recipes from the two tips of Europe: Sweden, at the very north, for my “epic” recipe, and Sicily, in the south, for the everyday version.

I give a traditional Nordic laxpudding, a cosy bake of potatoes, salmon and dill, bright Mediterranean touches from capers and lemon. And a quick pan-seared fillet, that most modern of preparations, benefits from the classic Sicilian contrast of currants, olives and pine nuts. How the fish is cooked is entirely different in these two versions, but, put together, they show the versatility of salmon and how well it adapts to different culinary circumstances. My sister promises to try it both ways.

Method
Step 1 Heat your oven to 240 Celsius. In a small bowl, mix a tablespoon of boiling water with the saffron and set aside for 20 minutes. (Longer is fine.)

Step 2 Cook the potatoes. In a large bowl, use your hands to mix the potatoes with two tablespoons of the oil, a half-teaspoon of salt and plenty of pepper. Spread out on two large parchment-lined baking trays and roast for 20 minutes, or until soft and caramelised. Set aside to cool.

Step 3 Cook the greens. In a large frying pan with a tight-fitting lid, heat two tablespoons of the oil over a medium-high heat. Once hot, add the anchovy and garlic and fry just until the garlic is starting to brown – 30 seconds to a minute. Add half the spinach, stir through for a minute to wilt slightly, and then add the remaining half. Cover for one to two minutes, to wilt some more, then remove the lid and cook for seven to eight minutes, stirring frequently, until all the moisture has evaporated and the spinach has begun to dry out. Raise the heat as needed to cook off the liquid. Turn off heat and stir in herbs. Stir in half the capers and set aside.

Step 4 Using your hands, mix the fresh and smoked salmon with a third of a teaspoon of salt in a bowl, separating the layers of smoked salmon in the process. Set aside.

Step 5 Make the custard. In a medium saucepan, whisk together the saffron and its soaking water, egg yolks, cornflour, lemon zest, a half-teaspoon of salt and plenty of pepper until smooth. Pour in the milk and cream and whisk until combined. Place over a medium heat and cook, whisking continuously to prevent the custard from scorching or sticking to the bottom of the pan. Cook for four to five minutes, until steaming and starting to thicken. Remove from the heat and set aside.

Step 6 When ready to bake, heat the oven to 200 Celsius. To assemble, start by layering half the potatoes at the bottom of a baking dish. (A deep 20cm-by-20cm square, 23cm round or 20cm-by-30cm rectangle will all work.) Top with half the spinach mixture followed by all the salmon. Top with the remaining potatoes and then the spinach. Pour the custard over evenly and bake for 25 to 30 minutes, or until the custard has set and is starting to brown. (If your custard seems dangerously close to the top of the pan, place it on a foil-lined baking sheet to catch any drips.) Remove from the oven and set aside for five minutes.

Step 7 In a small saucepan, combine the remaining capers with the remaining tablespoon of oil over a high heat. (The oil should just cover the capers, so you may need to add a touch more oil, depending on the size of your pan.) Fry the capers in the oil for one to two minutes, stirring frequently, until the capers have opened up and become crisp.

Step 8 Spoon the fried capers over the gratin, garnish with fresh dill, and serve warm with lemon wedges.

Step 2 Gently rub the salmon fillets with two teaspoons of the oil, a third of a teaspoon of salt and a good grind of pepper. Set aside while you make the relish.

Step 3 Add 75ml of olive oil to a large saute pan over a high heat. Add the celery and pine nuts and fry for four to five minutes, stirring frequently, until the nuts begin to brown. (Watch carefully, as they can burn quickly.) Turn off heat and stir in the capers and their brine, the olives, the saffron and its water and a pinch of salt. Drain the currants and add them as well, along with the parsley, lemon zest and juice. Mix well and set aside.

Step 4 In a large frying pan, heat a tablespoon of oil over a medium-high heat until it shimmers. Add the salmon fillets skin-side down and let cook for three minutes, until the skin is crisp. Reduce the heat to medium, flip the fillets over and cook two to four minutes more (depending on how much you like the salmon to be cooked).

Step 5 Divide the salmon between four plates and serve with the warm relish spooned on top. Scatter with the reserved celery leaves (if using) and serve immediately. – New York Times