In this introduction from his final cookbook, the groundbreaking chef, who would have been 63 today, writes about his daughter and the importance of family 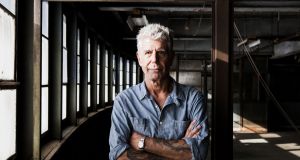 Tolstoy clearly never spent any time with my happy family. My eight-year-old daughter, Ariane, does a terrific imitation of my wife threatening to choke a taxi driver. It’s something she’s seen often enough to get dead right – my wife’s Italian accent, her anger, her exasperation as the driver takes yet another wrong turn on the way to my daughter’s school, and finally the kicker: “I’m going to keel you with my bare-a hands!”

It has been many months, maybe years, since anyone has seen my wife out of her regular attire of rash guard and spats. She’s a martial artist, a purple belt in Brazilian jiujitsu, and she trains full-time, seven days a week. Most of her efforts are spent practising horrifying new ways to quickly, forcibly manipulate opponents’ feet, ankles, and knees in such ways as to permanently damage their tendons and ligaments.

I travel the world for a living. On any given day, I’m as likely to be found in a longhouse in Sarawak, Borneo; in a cafe in Marseille; or in an airport transit lounge in Doha as I am to be found at home. My daughter is used to seeing her father’s face on TV and on the sides of city buses, accustomed to seeing him approached by strangers – and is decidedly unimpressed.

Her best friend, Jacques, from whom she has been inseparable most of her life, is Filipino, part of an extended family who easily spends as much time in our home as anywhere else. English, Italian, and Tagalog are heard interchangeably. My daughter is increasingly fluent in Italian. I am not.

What is it that “normal” people do? What makes a “normal” happy family? How do they behave? What do they eat at home? How do they live their lives?

I had little clue how to answer these questions for most of my working life, as I’d been living it on the margins. I didn’t know any normal people. From age 17 on, normal people had been my customers. They were abstractions, literally shadowy silhouettes in the dining rooms of wherever it was I was working at the time. I looked at them through the perspective of the lifelong professional cook and chef – which is to say, as someone who did not have a family life, who knew and associated only with fellow restaurant professionals, who worked while normal people played, and who played while normal people slept.

What they did at home, what it might be like to wake up late on a Sunday morning, make pancakes for a child, watch cartoons, throw a ball around a backyard – these were things I only knew from movies.

The human heart was – and remains – a mystery to me. But I’m learning. I have to. I became a father at 50 years of age. That’s late, I know. But for me, it was just right. At no point previously had I been old enough, settled enough, or mature enough for this, the biggest and most important of jobs: the love and care of another human being.

From the second I saw my daughter’s head corkscrewing out of the womb, I began making some major changes in my life. I was no longer the star of my own movie – or any movie. From that point on, it was all about the girl.

Like most people who write books or appear on television, who think that anyone would or should care about their story, I am a monster of self-regard. Fatherhood has been an enormous relief, as I am now genetically, instinctually compelled to care more about someone other than myself. I like being a father. No, I love being a father. Everything about it.

I’m sure my wife has a different view on this, but if I could go back to the diaper-changing, wake-up-in-the-middle-of-the-night-to-soothe-crying-baby phase of fatherhood? I’d be overjoyed.

I recognise that I am, in some ways, overenthusiastic about this late-in-life move into responsible parenting. And that I have a tendency to try to make up for lost time. Since so many of my happiest memories of childhood – summer vacations at the Jersey shore, off-season Montauk, trips to France – are associated with the tastes and smells of the things I ate, I feel uncontrollable urges to smother the people I love with food. I’ve become the sort of passive-aggressive yenta or Italian grandmother stereotype from films who’s always urging people, “Eat! Eat!” and sulking inconsolably when they don’t.

This pathology is further complicated by my time as a professional. I have developed work habits that, over three decades, imprinted on me the need to be organised, to have a plan, to rotate stock, to label prepared foodstuffs, and to keep a clean work area.

So on top of my desire to make up for lost time, and my psycho–Ina Garten–like need to feed the people around me, I am obsessive-compulsive in my work habits and anally retentive in ways that you’d find ideal in a professional brunch cook, but probably disturbing in a husband or parent.

That’s our family. One of the first things I discovered as I transitioned into my new “Daddy” phase was that I was usually more frantic preparing a dinner party for five friends at home than I was cranking out 500 à la carte dinners in a restaurant. The remedy for this anxiety, I’ve found, is to treat my friends or family just like another five-top in a sea of customers – until the food is served. Then I can sit down with them, relax, and enjoy their company.

From the introduction to Appetites: A Cookbook by Anthony Bourdain, published by Ecco Press