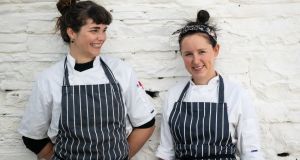 Brianna Turner (left) and Ashley Gribben who will be responsible for the food at the newly launched Pot Duggan’s in Ennistymon, Co Clare. Photograph: Alison Derham

The kitchen at Pot Duggan’s, the Ennistymon pub that will be one of the coolest places to eat and drink in the west of Ireland this summer, is being headed by two women who met while doing the Ballymaloe cookery course in 2015.

Since then, head chef Brianna Turnerworked at Dan Barber’s Blue Hill Farm in upstate New York and at Chez Panisse in California, before returning to Ireland and joining the kitchen team at The Fumbally.

She has been joined at Pot Duggan’s by Ashley Gribben, who has spent the past couple of years working at the Ottolenghi businesses in London.

Pot Duggan’s, which is owned by Trev O’Shea of Bodytonic, the Dublin-based pub, festival and entertainment group, had a soft opening last summer and closed for the winter while renovations were undertaken.

The former Ahern’s pub now has a sunny terrace, two barn rooms which can accommodate more than 100 people, and a riverside dining space for 30. There are also three bedrooms on the upper floors.

The kitchen is open from noon to 9pm, Wednesday to Sunday, and the lunchtime offering of soups, salads, toasties is followed at 5pm by a small plates menu. There will also be a daily Pot Duggan’s stew, and a weekend brunch menu.

“Our aim is to try to get as many local producers on the menu as possible, in a way that still says pub food – hearty, tasty and simple, with a touch of travel,” is how Turner describes what she will be offering.

The pub will have Brewtonic beers on tap, as well as a rotating selection of Irish craft beers and ciders. The cocktail list uses only Irish spirits combined with local ingredients, such as a marmalade whiskey sour made with Irish whiskey and Clare-made marmalade.

Regular events will keep the pub busy, and the Pot Duggan’s wine and cheese festival takes place on July 7th and 8th. potduggans.com.

Cait Healy, a 21-year-old culinary arts student from Clonakilty, is the first recipient of the Market Lane Group culinary scholarship. She plans to use the bursary to continue her studies by undertaking a BA in culinary entrepreneurship. The Cork restaurant group developed the scholarship in conjunction with Cork Institute of Technology.

There were both written and practical elements to the application process, with candidates having to write and present a paper on the theme “Is the Future of Irish Food Sustainable”, before preparing a three-course meal for a panel of judges.

Kevin and Catherine Dundon’s Dunbrody Country House has welcomed a new head chef, Tom Spruce. He was previously of Campagne and Residence and he has a varied programme of summer food and drink special events lined up for the Wexford country house hotel and restaurant.

“Tom joined our team just before Easter and is responsible for looking after the Harvest Room Restaurant, Dundons’ Seafood Bar and also the Local at Dunbrody, where he recently launched our new Sunday jazz brunch menu,” says Catherine.

The kitchen’s new smoker will be the focal point of a barbecue cookery demonstration on June 4th, a nice way to round-off a Bank Holiday weekend. A summer supper in the Local, the on-site pub, is included in the €45 fee.

“The smoker will bring a whole new dimension to both the barbecue cookery courses which we run from June to September, and also our pub menu. We’re thinking tender brisket, pork ribs falling from the bone, home-made smoked sausages (varieties such as duck and cherry, lamb and apricot, which will rotate daily throughout the summer) and, of course, smoked locally-caught fish from the Hook Peninsula.

A Gin Thing on Sunday, July 1st will see participants collecting botanicals in the Dunbrody kitchen garden before making their own gin. Gin tastings and cocktails and a gin-themed dinner complete the €95 package.

The Three Musketeers Children’s Fund, a charity close to the Dundons’ hearts (it was set up in memory of their nephews and niece, Søren, Connor and Saoirse, who died in a car crash in Denmark in 2013), will benefit from a Mad Hatters Tea party at the hotel on Monday, August 6th. A garden party, a woodland walk and afternoon tea, for €50. dunbrodyhouse.com.

Marks & Spencer has dropped the price of 200 food products in its stores in the Republic by an average of 24 per cent. Ken Scully, M&S manager for Ireland, said: “This is our biggest-ever price investment in the Republic of Ireland. We’re doing it to sharpen our prices for customers who we know come to us for our trusted value and great quality products.”

As part of the initiative, the price of some multibuy deals has been reduced, such as the three for €12 meat, fish and poultry deal (down from €14). Several salad ingredients, including peppers, lettuce, tomatoes, cucumber, salad onions and celery, have been reduced in price to 50 cent. Savings on fresh meat include 420g chicken drumsticks €1.80 (down from €3.10) and ribeye and striploin steak €5 (down from €7.30).

Loitering without intent: give teens a break this summer
10