A shop dedicated to Irish cheese 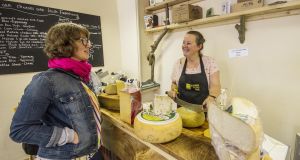 “I won’t sell anything I don’t find delicious, ” says Sinéad Ní Gháirbhith, whohas just opened The Cheese Press in Ennistymon, Co Clare. “I could happily live off the food in this shop. Our mission is to give food lovers healthy food with the least possible impact on the environment.”

“All our cheeses are made in Ireland from Irish milk. Our coffee is roasted in the Burren, and we have organic sourdough and other bread baked in the shop.”

The Cheese Press will also host talks on the history of Irish cheese, given by Ni Ghairbhith, as well as workshops by herbalist Lisa Guinan and forager Oonagh O’Dwyer, and yoga classes.

Opening hours are 8am to 6pm, Monday to Saturday and the shop is in the town’s main street. Regulars save 30 cent on each coffee by bringing their own cup or mug, in keeping with the owner’s environmentally friendly ethos.

Chetna Makan reached the semi-final of Great British Bake Off in 2014, and her debut cookbook The Cardamom Trail featured many of her intriguingly spiced cakes that reflect her multicultural heritage. There were also some terrific recipes for spicy Indian snacks, savoury pastries and dips in that book, so it comes as no surpise that her follow-up is an exploration of Indian street food.

Chai, Chaat & Chutney takes Makan, who was born in Jabalpur, in central India and moved to Broadstairs in Kent 10 years ago, on a road trip to Mumbai, Kolkata, Delhi and Chennai, exploring regional street food specialities. The former fashion designer has a wonderful eye, and is heavily involved with the styling of her books, to good effect.

Spice bag gets even spicier

Chef Kwanghi Chan’s Chan Chan spice bag seasoning has spawned a Korean hot pepper version. This more spicy mix has red pepper and chilli, as well as the salt, star anise, fennel, ginger, cardamom, casia, cloves, garlic, Szechuan pepper, sesame seeds and black pepper that are to be found in the original version. Both are available from SuperValu nationwide, from Iceland, and from Dublin’s Asia Market (€2.95).

Barilla pasta pops up at Punchestown

Barilla, the Italian pasta brand, is bringing its By Barilla pop-up events space to Ireland for the first time this summer, launching at next weekend’s Punchestown Music Festival (July 29th-30th).

Antipasti, a selections of pasta dishes and dessert are served at communal tables. Bookings will be accepted, so you can schedule a meal around your music plans. Three courses, plus wine, will cost euro 25.

Should women erase men from their lives? This writer thinks so
2