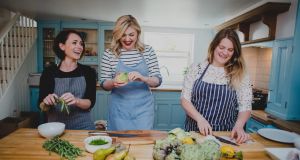 Dubliner Alison O’Reilly, who narrowly missed out on making the final three in the recent BBC television MasterChef series, has joined up with two of the other contestants, Lorna Robertson and Giovanna Ryan, to form Three Girls Cook. The trio have already done some star turns at food festivals, and their recent series of supper clubs in London’s Notting Hill was a sell out.

London-based O’Reilly has launched a new career as a marketing specialist for food businesses, a food writer and private chef. She plans on returning to Dublin next month to stage a supper club of her own, championing Irish ingredients, as well as doing a pop-up with Three Girls Cook. The dates and venues are to be confirmed, but you can follow O’Reilly’s progress on social media, where she is @foodbyalison on Twitter and Instagram.

Take your coffee the ‘Fairchain’ way

They say Fairchain is “based on the principle of shared value” and that roasting the beans locally means “more profit stays with the people who contribute most”.

The range includes a Two To Tango filter blend of Limu and Jimma beans, that makes a great flat white or cappuccino, they say, and a 100 per cent Limu single origin bean that is best served black. The coffee is sold in 250g bags (€8.50), and is available online at moyeecoffee.ie.

Ireland, and the Boyne Valley in particular, will play a significant role in the prestigious Oxford Symposium on Food & Cookery, which takes place in the British university town next week. The relationship between food and the landscape is the theme for the symposium, and Fáilte Ireland, through its Food Champions programme, will be hosting an Ireland’s Ancient East-inspired banquet to welcome the 265 international delegates attending the event on July 7th-9th.

Boyne Valley Food Series chairperson and food champion Olivia Duff is co-ordinating the dinner, which will showcase the region’s food and drink. Chefs Rob Krawczyk, Mary Farrell, Ryan McGivery and Dearbhla Moriarty are planning on serving up a multicourse feast. It will include canapes, a farming-to-fishing Boyne Valley board, highlighting produce from land and sea, and a tongue-to-tail meat feast accompanied by seasonal vegetables. For dessert the theme is milk and honey, which will appear as an ice cream, and a cheese board will feature the region’s excellent dairy produce.