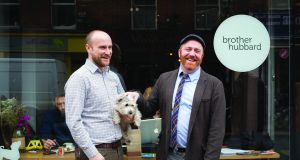 “It’s beside us, it became available and it was very hard to ignore.” Garrett Fitzgerald is talking about the expansion of his Capel Street cafes Brother Hubbard North and Little Brother, into the former Gary Rhodes restaurant on the corner of that street and Mary’s Abbey, along which the Luas runs.

The three premises will be interconnected when the new business, which will retain the Brother Hubbard North name, opens in early autumn.

Rhodes D7, which opened to fanfare in 2006 and shut quietly three years later, was a modern brasserie with a very large floor space and 250 seats, fronted by the UK chef and TV personality.

Fitzgerald and his partner James Boland plan to extend into the new space in stages.

“We are going to operate in only part of the premises initially – the kitchens (allowing for a more evolved menu) and about half the seating area. We are holding off on the remaining seating area for a little while, whilst formulating a separate and exciting plan for that,” Fitzgerald says.

“We will be able to provide a far more spacious and comfortable offering with all this extra space and we have a very exciting plan.”

The outdoor terrace area of the former Rhodes restaurant, facing the Luas line, will be transformed into “ a very green space, with lots of vegetation”.

“The brief for our designers, Designgoat, is that we want the space to feel as nourishing as our food. We are working with a plant consultant on this. We are also working on a plan to launch a social enterprise which we hope will be an exciting new evolution for the business and for our team.”

Fitzgerald says that both Brother Hubbard North and its southside sibling Brother Hubbard South on Harrington Street, are moving in a more sustainable direction. There are menu changes afoot too.

“We often describe our menus as being ‘deceptively vegetarian’, Fitzgerald says. “By that, we mean we often think of a dish first as a vegetarian offering, and then see how we may, or may not, incorporate a meat component.

“We recently decided to see what else we can do to incorporate even more of not just a vegetarian element to our offering, but to go one step further and go more vegan.

“It seemed like the right thing to do. Furthermore, it is a more sustainable and ethical approach to creating a menu, and these are factors we are going to focus on more and more over the coming months.”

The new evening menu at Brother Hubbard is now more than 50 per cent vegan, and the wine list features vegan wines.

“We still love meat, but it has its place and our vegan options are no less loved than their meaty neighbours,” Fitzgerald says.

Fitzgerald plans to begin work next year on a second cookery book, a follow-up to the Brother Hubbard Cookbook, and says he is “considering some further TV work as part of that”.

He and Boland are working with Amnesty International on a launch event “built around Syria”, for their expanded Capel Street premises.

Hilary Fannin: Will you help send these Irish children back to school?
6

Why talking to strangers is good for you
7

Two to savour: A German Riesling and an Austrian Zweigelt, each for less than €8
8