You can eat out in Ireland on December 26th, if you know where to look 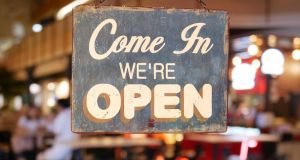 In some areas, St Stephen’s Day is traditionally set aside for heading to the pub. Photograph: iStock

Exhale. All the effort to shop or feed or gift or appease is done. Today, you don’t even want to open the fridge. Some fresh air, some brisk movement, and a (hopefully) quiet, undemanding bite.

Most eating spots which are serving on St Stephen’s Day could be divided into Curry or Cure. Other than some hotel restaurants, many of the eateries open today are Asian, though there’s a sprinkling of others back at work, and lots of pubs serving food, with quite a few doing seafood.

Whether a pub opens on St Stephen’s Day or not comes down to the owner’s decision (probably based on whether there will be much business) on what is, in some areas, traditionally a big going-out night. So the Licensed Vintners Association expects “all suburban pubs to be fully open on St Stephen’s Day (for both food and drink) and it will be a very important trading day for publicans”. While many pubs in Dublin city centre will remain closed on St Stephen’s Day, some will open, says Donall O’Keeffe, chief executive of the LVA, and normal service will return from December 27th.

This is an ad-hoc selection of restaurants, pubs and hotels serving food today. If you’re travelling with these in mind, double check with the venue directly:

Bewley’s on Grafton Street is open all day on St

Stephen’s Day, from 9am to 8pm.
M&L Szechuan Chinese restaurant on Cathedral Sreet, Dublin 1, one of the few restaurants open on Christmas day, is serving all through the Christmas season.
Ukiyo, the Japanese/Korean eatery on Exchequer Street, Dublin 2, is open from 2pm for lunch and dinner, with DJs and dancing in the lounge until 3am.
Jaipur Indian restaurants in Dalkey and Malahide are open on St Stephen’s Day for dinner.
Slattery’s bar, Capel Street, Dublin 1, is open for food, 12-9.30pm.
Seasons Restaurant at the InterContinental hotel, Ballsbridge, Dublin is open. The hotel also has an elaborate Willy Wonka-themed family brunch today (and on New Year’s Day), including bloody Marys and a buffet with a choice of mains and desserts, (from €85.00pp including a glass of champagne).
Gallagher’s Boxty House, Temple Bar, Dublin is open.
Layla’s at The Devlin Hotel, Ranelagh, open from 12pm
Fade St Social, Dublin 2, is open for lunch 12.30-3pm, and for dinner from 5pm.
Sophie’s at The Dean Hotel, Harcourt Street, Dublin 2, is open from 12pm.
Brasserie Sixty 6, South Great George’s Sreet, Dublin 2, 4-9pm
Stella Diner, next door to the Stella cinema in Rathmines will be open 1pm-10pm.
Wagamama Japanese and Asian restaurants in Dublin will be open from 12pm.
Stoop Your Head bar and restaurant in Skerries, which serves fresh prawns and crab claws from the bay, is open, and ideal for after a walk around the head in Red Island.
Lemon and Duke bar on Royal Hibernian Way, just off Grafton Street, is serving full menus from 12pm.
The Bridge 1859 bar, Ballsbridge, Dublin, has a full menu from 12pm.
The Saddle Room, at the Shelbourne Hotel, Dubin 2, is open.
Abbey Tavern on Abbey Street in Howth is open.
The Doghouse, Howth is open from 10am, with last serving at 11pm, for after a walk on the pier (dogs welcome).
Merrion Hotel’s Cellar and Garden Room in Dublin 2 is open.

Monks Ballyvaughan, a seafood restaurant in Co Clare, is serving seafood all day.
Linnane’s Lobster Bar, in New Quay, Burren, Co Clare, is serving food from 12pm.
The Pantry cafe and restaurant, at Merchant’s Quay in Cork is open.
The Blue Haven, in Kinsale, Co Cork, opens from 10am, with full breakfast menu until noon, and a la carte from 12 to 10pm.
Hamlets, Kinsale in Co Cork is open and serving food from 12-10pm
Old Bank House Cafe, Kinsale, Co Cork, is open all day.
Inchydoney Island Lodge and Spa Hotel in Clonakilty, Co Cork: the Gulfstream Restaurant and Dunes pub and bistro are both open, for after a St Stephen’s Day walk on Inchydoney beach.
Celtic Whiskey Bar and Larder, in Killarney, Co Kerry, is open for evening service
Neville’s Cross Inn, in Adare, Co Limerick is serving from 12pm.

Brasserie on the Corner, Eglinton Street, Galway, is open from 4pm.
Harbour Hotel restaurant on New Dock Road in Galway is open.
The Galmont Hotel, on Lough Atalia Road in Co Galway (formerly the Radisson) is open.
Islands Restaurant in Hotel Westport on Newpor Road, Westport, Co Mayo, is open.
Yeats County Inn, in Curry, Co Sligo is open 8am to 9pm.