The brooch that biffed Boris: Lady Hale’s spider becomes a story of its own 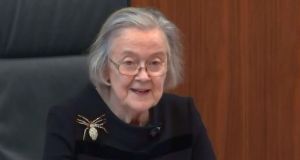 Lady Hale was wearing a spider brooch when she announced that Boris Johnson’s prorogation of the UK parliament was unlawful. Photograph: UKSC/AFP/Getty

Lady Hale’s image was beamed across the world with all the signifiers of the UK’s supreme court – papers, judge’s bench, austere clothing. It was the court’s stunning verdict that Boris Johnson had unlawfully prorogued parliament in his Brexit battle that would dominate the headlines, of course, but the spider brooch that Hale, the president of the court, wore on her black dress had the optics that made it a story of its own.

Wearing a spider to deliver news that trapped the British prime minister felt pointed. Twitter certainly read it that way. “What could Brenda Hale be telling us with her AMAZING giant spider brooch?” wrote one user, @Anna_Girling. By Tuesday afternoon there was a call for the brooch to have its own Twitter account.

The brooch soon made its way, via social-media attention, on to a T-shirt sold by Balcony Shirts. Based, ironically, in Johnson’s west London constituency of Uxbridge, the company is donating 30 per cent of proceeds to the charity for the homeless Shelter. It claims to have raised more than £4,000, or about €4,500, in the couple of hours after Hale delivered the court’s verdict.

Brooches are enjoying something of a moment in fashion this autumn – seen on the catwalk at Versace and Erdem – but Hale is a brooch trailblazer. She has a particular fondness for creepy-crawlies – frogs, beetles and the like. On her profile on her court’s website she wears a brooch of a caterpillar – like the spider, it’s an animal that hardly has the cute factor on its side.

'Weaving spiders come not here', 'Oh, what a tangled web we weave when first we practise to deceive', etc.... What could Brenda Hale be telling us with her AMAZING giant spider brooch...? pic.twitter.com/rOFOGSyl6R

With the spider, Hale joins a list of high-profile women who use the seemingly unassuming brooch to send a message – or for observers to spot one, anyway.

Queen Elizabeth’s brooches for Donald Trump’s visit in 2018 – one of which was given to her by Barack Obama – were interpreted as statements of her displeasure with the current US president.

Madeleine Albright, as secretary of state under Bill Clinton, was open about her use of brooches – or pins, to Americans. After being dubbed an “unparalleled serpent” by Iraqi state media, she wore a snake brooch to her next meeting with the country’s state officials, and her brooch-as-statement career began.

Albright published a booked called Read My Pins in 2009 and has continued to allow her pins to say it all.

The smashed glass ceiling design that she wore to watch Hillary Clinton make her nominee speech in 2016 broke the internet. Hale’s spider could do the same. It certainly suggests Hale doesn’t squirm when faced with any kind of insect. – Guardian