Boris Johnson not fit to be prime minister, says Corbyn

British Labour leader Jeremy Corbyn called on Boris Johnson to consider his position and call a new election after the supreme court ruled that the UK prime minister's move to suspend parliament was unlawful. Video: Reuters 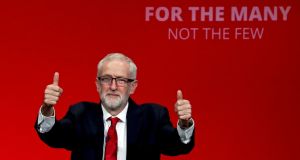 Jeremy Corbyn has told Labour’s conference that Boris Johnson is not fit to be prime minister and must resign, after the supreme court declared Mr Johnson’s decision to shut down parliament was illegal.

In a rousing speech, hastily brought forward from the traditional Wednesday lunchtime slot in response to the supreme court judgment, the Labour leader slammed what he called Mr Johnson’s “born-to-rule government of the entitled”.

He said: “Boris Johnson has been found to have misled the country. This unelected prime minister should now resign.

“He thought he could do whatever he liked just as he always does. He thinks he’s above us all. He is part of an elite that disdains democracy. He is not fit to be prime minister.”

With parliament due to reconvene on Wednesday morning, Mr Corbyn said: “The democracy that Boris Johnson describes as a rigmarole will not be stifled, and the people will have their say.”

He did not set out how Labour planned to proceed when MPs returned to Westminster, but called for a general election once a no-deal Brexit has been definitively ruled out.

“This crisis can only be settled with a general election. That election needs to take place as soon as this government’s threat of a disastrous no-deal is taken off the table. That condition is what MPs passed into law before Boris Johnson illegally closed down parliament.”

Labour has been in discussions with the other opposition parties about how best to respond to the court judgment.

One possibility is for the Labour leader to table a motion of no confidence. If Mr Johnson lost, it would be followed by a 14-day period in which MPs could try to assemble an alternative governing majority.

Mr Corbyn wrote to other opposition leaders earlier this year saying he would seek to be prime minister for a short period, for the sole purpose of extending article 50, and triggering a general election.

However, the Liberal Democrat leader, Jo Swinson, has expressed concerns about whether Mr Corbyn could win the necessary cross-party support, and rebel Tories would be extremely reluctant to propel the Labour leader into Downing Street, even temporarily.

Some allies of the Labour leader believe he should instead offer to call a referendum on Brexit, with a general election to follow afterwards.

But Mr Corbyn’s speech appeared to point to a determination to secure a general election first.

He also gave a staunch defence of the Brexit position passed by the conference on Tuesday after weeks of wrangling.

“We need to get Brexit sorted and do it in a way that doesn’t leave our economy or our democracy broken. The Tories want to crash out without a deal and the Liberal Democrats want to cancel the country’s largest-ever democratic vote with a parliamentary stitch-up.

“Labour will end the Brexit crisis by taking the decision back to the people with the choice of a credible leave deal alongside remain. That’s not complicated. Labour is a democratic party that trusts the people.”

Several senior party figures, including Emily Thornberry and Keir Starmer, had hoped Labour would pass an alternative motion, committing the party to campaigning for remain ahead of a general election.

A Liberal Democrat spokesperson said the party could support a vote of no confidence this week, “because we want to see an alternative government in place to deliver on an extension”.

“The people who have been mentioned before are Harriet Harman and Ken Clarke, but at this stage anyone who could command a majority would probably be given an airing.” – Guardian