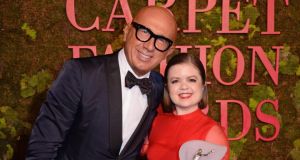 The Irish writer and academic Sinéad Burke was presented with a Leaders Award last night by Gucci’s chief executive, Marco Bizzarri, at the Green Carpet Fashion Awards, at La Scala, at the close of Milan Fashion Week. The award was in recognition of Burke’s advocacy of inclusion in all aspects of design.

“It is not lost on me that they chose the tallest man in fashion to give this award,” she joked about Bizzarri, who has transformed the fortunes of the Italian heritage brand, as they embraced on the stage.

The black-tie gala, which celebrates sustainable fashion, already has a high profile despite being in only its second year: Cate Blanchett, Cindy Crawford and Julianne Moore were among this year’s presenters.

In an impassioned acceptance speech, the tireless campaigner for raising awareness of design and disability, who is 104cm (3ft 5in) tall, said she had loved fashion since childhood, “but, growing up, I felt left out. Fashion shapes culture and transforms the world around us. What can you” – the Italian fashion industry – “do to use your power, position and privilege to make this beautiful and exclusive space more inclusive for those, like me, who spend decades dreaming of a moment like this?” she said to applause. “It was an incredible speech,” Blanchett said.

Burke, who received her award in a floor-length red silk dress by Rochas, said afterwards that she had been nervous before the event but that “accepting that award on the stage of La Scala realistically represented a decade of dreaming”.

The Green Carpet awards, which were founded by the environmentalist Livia Firth – her husband is the actor Colin Firth – are fast becoming a European challenge to the celebrated Met Gala in New York.Last night’s guests gathered in front of the historic opera house to sip champagne on a green carpet – where they had to avoid stepping on the trains floating behind many a lavish gown.

Anna Wintour, the editor-in-chief of American Vogue – her colleague Edward Enninful, editor-in-chief of British Vogue, is one of Burke’s many supporters and collaborators – arrived in a glittering full-length green dress, surrounded by bodyguards.

Awards were given to Elle Macpherson, Suzy Menkes, Donatella Versace and Ferragamo, among other notable Italian brands with sustainable credentials. At one point about 50 Ferragamo shoemakers came out on stage in their working clothes.

The winner of the Franca Sozzani award for best emerging designer, Gilberto Calzolari, from Milan, had worked with Marni, Valentino, Miu Miu and Armani before founding his own label, in 2015. His collection reused jute coffee sacks, lining them with an archive fabric and embellishing them with lead-free crystals. His prize will include a year-long mentorship to help him develop his business, according to Desirée Bollier of Value Retail, which operates Kildare Village and 10 other outlet villages around the world.

‘My city roof terrace saved me in lockdown’