With the theme of Heavenly Bodies: Fashion and the Catholic Imagination, there was always going to be high drama on the red carpet

Katy Perry came as an archangel, Rihanna dressed like the pope, and Kim Kardashian was a golden goddess for New York's Met Gala on Monday (May 7) on a night of high fashion inspired by religion. 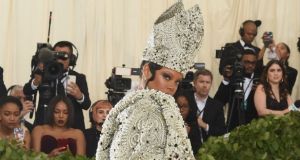 Rihanna wore a papal crown and Katy Perry opted for 6-foot angel wings. The celebrities came as priests, angels and nuns to Monday nights Met Gala which this year had the theme of “Heavenly Bodies: Fashion and the Catholic Imagination.” As predicted, the Metropolitan Museum of Art’s annual Costume Institute Benefit, widely known as the Oscar’s of Fashion, included an array of interpretations on the evening’s theme: Dramatic trains, headpieces, and religious imagery were everywhere on the red carpet.

Designed to create a dialogue between designers, devotion and divinity, the exhibition which opens on May 10, features couture from fashion luminaries including Dolce & Gabbana, Givenchy and Schiaparelli. Surprisingly, the Vatican has been on board with the exhibit, lending more than 40 ecclesiastical pieces borrowed from the Sistine Chapel collection including papal robes and tiaras.

With activism the buzz word in fashion, and the sensitivity around religion in the current climate, an exhibition and the conjunction between faith and fashion, is both an opportune and provocative choice of theme. Christian iconography has long been explored in popular culture. Particularly, female music artists who blend pop with biblical symbolism, most notably Madonna, Beyonce, Katy Perry and Lady Gaga. Liturgical dressing has also been inspiring designers for decades, some highlights from the ecclesiastic garb on display are baroque-laden dresses by Dolce & Gabbana,

Cardinal-shaped evening coats by Balenciaga and crufix-emblazoned gowns by Versace, and McQueen’s dark, gothic altarpieces - all encouraging us to analyse the influence that opulent visual language of the Catholic Church has on fashion.

Always delivering the most dramatic red carpets, at last night’s Met Gala - co-hosts for the event were Rihanna, Amal Clooney, Donatella Versace, Anna Wintour and Stephen and Christine Schwarzma - celebrities took us to church connecting the holy to the haute, in lavish, architectural creations.

From ornate crown to gilded headbands, the religious theme really went to the celebrities heads. No, really. Never has there been as many celebrities wearing hair accessories on one red carpet - from Rihanna’s Maison Margiela gown with matching papal mitre, to Lily Collin’s sliver halo topping off her Givenchy gown, Frances McDormand in a full Valentino runway turquoise runway look, massive floral headpiece included. But it wasn’t all theatrical headpieces, Amanda Seyfried channelled a modern goddess in a marigold draped dress by Prada with matching subtle golden tiara.

If there were themes for the dress, it was a subtle nod, for many, to the Vatican with red, white, gold colour schemes. Amber Heard chose the symbolic shade of scarlet in a monastic fronted dress with revealing back by Carolina Herrera. Also choosing the statement shade was Anne Hathaway in custom Valentino. Glimmering in gold was Kerry Washington in a long-sleeved, body-skimming Ralph Lauren gown, and Rosie Huntington-Whiteley also chose the stalwart American designer in a angelic halo headpiece and gold embellished gown. Reality star Kim Kardashian - who came without Kanye West - also chose the shimmering shade in a body-conscious chainmail with crufix embellishment dress by Versace. White gowns are a perennial classic on the red carpet, and tonight it seemed extra symbolic. Choosing the pure shade was Alexa Chung in her own design with a white puffed-sleeve mini with pearl embellishments, Uma Thurman in a Gabriela Hearst pearl-encrusted minimalist gown, and Kendall Jenner in an ivory Off-White jumpsuit, a stark contrast to her barely there outfit from last year.

Ariana Grande, Cardi B, Katy Perry, and Sarah Jessica Parker stuck religiously to the theme. Grande’s printed dress was made up Michelangelo’s Last Judgement. Perry’s interpretation of the theme was heavenly, quite literally, she wore a gold Versace chain-mail dress, and giant feathered angel wings. Continuing on the fluttering theme was Evan Rachel Wood in a embellished feather dress worn over black trousers. Looking every inch the Queen of the ball, Sarah Jessica Parker dressed as the exhibition itself in a  gold brocade gown by Dolce & Gabbana, plus a matching mitre. Sleek and stark, choosing the simplest way of embracing the trend was Ruth Negga, Alicia Vikander, Jennifer Connolly, and Rooney Mara in chorister column silhouettes. Negga Vikander and Connolly all went for a monochromatic Louis Vuitton gowns.

Kate Moss made her grand re-entrance to the Met Gala, her first since 2009, in a draped black Saint Laurent mini dress. Also choosing the classic shade was Zoe Kravitz who showcased more the body theme with a barely there black lace dress. Director Greta Gerwig gave her black dress a habitual twist by teaming with a white high-neck blouse. Adding a futuristic twist to her bizarre bra-revealing black gown, Kylie Jenner completed her look with Matrix-style glasses. Taking a gothic turn was Madonna in an all-black, full-skirted look with heavy veil and Cara Delevingne with a fish-net gown complete with pink hair.