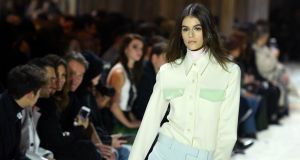 As New York Fashion Week comes to a close – the trends of the season are already showing – we spotlight the key moments from the runways so far this week.

It may have appeared strictly business at Alexander Wang’s show when he set up his catwalk in an office in Times Square, complete with fake cubicle walls and fluorescent lighting. But the clothes were anything but executive, with him showcasing cerise pink power suits and spike stilettos. The NSFW (not safe for work) suiting theme continued at Dion Lee, Jonathan Simkhai, and Cushnie et Ochs with asymmetrical necklines and abbreviated hemlines that took the suit away from day and into night.

It was a literal zoo at NYFW with loud and proud animal prints prowling the runways of Tom Ford, Zadig & Voltaire and Victoria Beckham. Whilst Beckham stuck to a neutral leopard print played out in maxi trench coat, others experimented with rainbow-coloured animal prints cut in every silhouette.

Many designers at New York Fashion Week used their prominent position to make pointed references to current events and the Time’s Up movement. From Tom Ford’s literal take with Pussy Power handbags and shoes, to Prabal Gurung’s layered but powerful show. In addition to technicolour cheetah, lame and leggings, Ford sent a model down the runway carrying a bag emblazoned with “Pussy Power”. Gurung made reference to feminism through this palette and silhouette which were inspired by female dominate societies - Mosuo tribe of China and India’s activist Gulabi Gang. Furthering the feminist tone, the front row included #MeToo founder Tarana Burke and the finale walk when a diverse cast of models walked the runway side by side, holding white flowers. Activist Myriam Chalek, used the spotlight to hold the Time’s Up Show, a catwalk showed that doubled as a protest, with models sharing their experiences of sexual harassment.

What comes after millennial pink? With Pantone naming the striking shade of ultra violet the colour of 2018, it’s not a surprise to see all hues of the purple creep onto the catwalks of New York autumn-winter after a strong showing in spring. From lilac, to plum, to magenta, designers like Tibia, Brandon Maxell, Sies Marjan, and Creatures of Comfort all embraced the colour that’s set to dominate the year.

Prepare to enter The Matrix again. From sharp, streamlined silhouette coats with high-gloss finishes to thin sci-fi inspired frames - the 1990s dystopia is back in style. The street-style and celebrity crowd, like Bella Hadid, Rosie Huntington-Whitley and Kendall Jenner, have already embraced it front row, as well as Alexander Wang’s catwalk with him showcasing Morpheus-inspired glasses throughout the whole show while topping it off with a wet-look belted coat.

It was goodbye to Carolina Herrera as she steps down as creative director and passes the torch to Wes Gordon. Her last show was a apt tribute to her with a parade of models closing the show, each wearing a white blouse - Herrera’s signature - with a brightly coloured ball skirt, and a standing ovation from the crowd. Wang also bowed out of the traditional New York Fashion Week calendar, choosing to move to pre-collection schedule in June and December. While Victoria Beckham, also waved farewell to the New York schedule - she is moving to London for her 10th-anniversary show in September. Choosing to end on a high - she showed an elegant utilitarian collection with slate and mossy tailored coats, and shades of deep green, brown and sapphire blue.

The forecast might be set to freezing in New York but spring arrived early on the runways with designers Tory Burch, and Jason Wu transforming their catwalks with big blooms. Providing an optimistic outlook, Tory Burch provided a picture perfect setting with a garden planted with hundreds of pink flowers while Wu’s runway was filled with linear and loose silhouettes in monochromatic shades with pops of emerald and sapphire that reflected the wall of blooms that lined the catwalk.

Luckily for those who like to travel heavy and opt everything-but-the-kitchen-sink mentality, the fashion world’s appetite for maximalism is back and it’s manifesting in bigger-than-ever bags. While the mini-bag trend is no-where near over, Victoria Beckham, Monse and Sies Marjan ditched the itty bitty carry-alls and proposed totes of epic proportions on the autumn catwalks.

Knitwear may be one of the most perennial trends on an autumn catwalk but on the autumn catwalks for 2018, it’s brought to life with a little more of a luxurious twist. Next autumn, there will be no need to retire your knitwear for evening. Instead you’ll be able to take from 9-to-9 with amped up knits as seen at Oscar De La Renta, where a classic black jumper was upgraded with a tulle overlay and embroidered flowers.

While the scrunchie might have had its resurfaced moment last season, the autumn catwalks are having an all-out hair accessory renaissance. Starting with the return of the banana clip as seen worn as a nod to ‘80s executive at Alexander Wang. But Wang wasn’t the only designer pull inspiration from the depths of ‘80s school hair experience, hairstylist Anthony Turner sent models down the runway of Prabal Gurung with comb headbands. Proving the ‘80s is the new ‘90s, Tom Ford continued with the statement headgear with thick, black leather headbands paired with dishevelled up-dos and in-your-face ear candy.