We took three ‘Love/Hate’ actors out of the gritty crime underworld and dressed them up in red carpet style. By Deirdre McQuillan 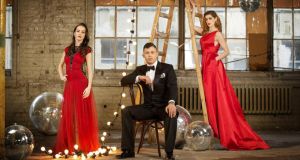 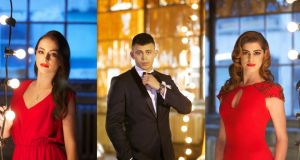 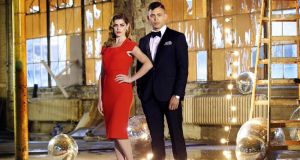 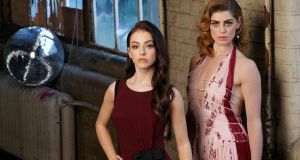 We’re all (well, nearly a million of us) familiar with their characters – Gavin, Trish and Kellie – from the RTÉ series Love/Hate, but for this Christmas shoot, we’ve taken them out of the crime underworld and dressed them up in red carpet style: gorgeous gowns, tuxedos, dickie bows and (real) sparkle.

However the glamour of red evening wear and black tuxedos is offset by the grittiness of the location. Shot against the backdrop of the former John Player factory in Dublin, there are reminders of the stark urban landscape their characters are familiar with in the series, which recently had its fourth season finale. And red is, of course, the colour of both love and of hate.

The look is sophisticated and sultry – a far cry from the hoodies, tracksuits and skimpy clothes in the series. With Christmas almost upon us, it shows fashion’s power to transform – even one strong colour can create a different persona.

Two of the actors, Aaron Heffernan and Aoibhinn McGinnity, (aka Detective Garda Gavin Brogan and Trish) have also appeared on stage together in Brecht’s epic masterpiece The Threepenny Opera at The Gate.

Aaron Heffernan
From Harold’s Cross in Dublin, 23-year old Heffernan is the son of TV producer David Heffernan and former model Tina Denis. A graduate in drama studies and classical civilisation from TCD, he is also an award-winning puppeteer and a co- founder of the Collapsing Horse Theatre.

As Garda detective Gavin Brogan in Love/Hate, he plays the youngest of four garda characters who are part of an undercover unit trying to keep tabs on Nidge and his criminal gang. “There’s a lot of slagging because he goes to the gym, he’s a gym rat and gets the brunt of it. But he is quite quiet because he is still learning the ropes. I think he is a good detective and diligent. They are quite a motley crew of guards – it’s a bit of an A-Team and I like to see myself as the Mr T of the A-Team,” he says.

An athletic 6ft 2in, he describes his personal style as casual, “although I wear suits when I go out, but I am quite attracted to the American collegiate varsity style – vests, jeans, board shorts and flat caps.”

Favourite shops include Hacketts and Zara and as for shoes, he wears mostly high tops and suede loafers, “the kind of shoes my dad wears”.

Aoibhinn McGinnity
From Monaghan, the daughter of a GP and the second eldest of a family of four, McGinnity took up dance classes in the town at the age of 11 with Lynn Jackson, a former dancer with the Royal Ballet “who is a credit to the country”, she says.

After school, she continued her dance studies in Dublin and then left for London to study musical theatre where she “fell into acting”.

Her character, Nidge’s wife Trish, in Love/Hate , “is feisty, ballsy – all these things – and the more I get to know her, the more I see her loyalty and selfishness. Loyalty to her family – she has been with Nidge since school and as much as they bicker, she remains loyal to him and the kids.

“She has an ability to turn a blind eye and push things under the carpet. She sweats the small stuff as a distraction from the bigger issues – it’s a survival technique. I think she’s hilarious and eccentric in her own way; she’s also silly and lazy.”

In Love/Hate as Trish she never knows whether wardrobe will dress her in leopard print, hoody tops or black leather. As for her own style, she loves the 1970s – the patterns, the textures, the hair and make-up. “And I love a good track suit,” says the actor who can be seen cycling around Dublin in waxed leather trousers and Doc Martens on a mountain bike “plucked from a garage in Monaghan”.

When it comes to shopping, she says she’s a good bargain hunter, adding that she hates “tight, hard jeans”, preferring the softness of Zara’s ripped ones and that her style “is a bit of variety mixed in with comfort.”
Kelly Thornton
The story of how 16-year old Kelly Thornton got into an acting career is the stuff of novels.

Out shopping with friends in Dublin, she was stopped by a casting agent in Grafton Street who invited her to audition for a movie. At the age of 14, with no previous experience and facing stiff competition, the schoolgirl landed the role of Emma in Lance Daly’s Life’s a Breeze, the recession-set comedy with Fionnula Flanagan and Pat Shortt which premiered in Galway in July and at the Toronto Film Festival in September.

There is, however, a family background in showbusiness; her grandfather was in a showband that toured the US and her mother Maria is a talented singer.

Kelly opened the fourth series of Love/Hate (with her 11-year old-sister Robyn) playing Kellie, one of the kidnapped family of security van driver Peter Weldon.

In the episode, she and her mother and sister were kidnapped by gangsters Tommy (Killian Scott) and Fran (Peter Coonan) and held hostage on a ghost estate. However Kelly’s character manages to inveigle her way out of the situation.

“I guess she’s pretty smart,” she says of her character. “She knows how to manipulate her way out of a bad situation. She’s quietly clever, pretty smart and not naive. She’s cool.”

In fifth year in St Louis’ in Rathmines, Kelly, who now has an agent in Los Angeles, is trying to balance a burgeoning acting career with her school studies .

A grounded, modest teenager, who likes shopping in places like Urban Outfitters, H&M and Topshop, she admits to being “kind of laid-back about clothes” but loved dressing up for this shoot.