Ancient wisdom on the curriculum at Ireland’s only Druid school

There are no exams, and the learning never stops, but the Celtic Druid Temple in Co Roscommon promises to put its students on a path to self-knowledge 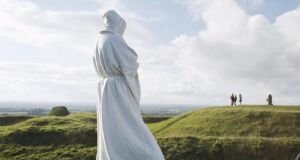 The Celtic Druid Temple, Ireland’s only Druid school, sits on a six-hectare farm surrounded by pine forests near Castlerea in Co Roscommon. The summer solstice seems like an ideal time to learn more about the place, so I imagine sitting in on ceremonies and visiting sacred sites, partaking in its archery and leathercraft lessons, or maybe even camping out beneath the stars. But that isn’t quite what they have in mind.

A notice on the school’s website (yes, Druids use the internet) stipulates that any media coverage must be approved before publication, something The Irish Times has a policy against. Con Connor, who runs the school with his partner, Niamh, explains that this is due to the long history of misrepresentation surrounding Druidism, dating from Roman times to recent Irish schoolbooks on religion. They do not wish to be misunderstood or portrayed as eccentric cranks.

After consulting with a core community of about 40 Druids, Connor instead proposes an email interview. We proceed with an air of cautious optimism. The most important thing to understand about Druidism, Connor explains, is its reverence for nature.

“Druidism is an expression of the indigenous wisdom tradition of pagan Ireland connecting us to nature as the supreme being and to the spirit of our ancestors.” Put another way, Celtic Druidism is a means of knowing yourself, understanding where you came from and realising your potential. Progressing along that path, Connor says, is to “feel and respect the inherent life-force in all things”.

Curious choice
The internet, then, seems like a curious choice of medium. (More than 12,000 people worldwide follow the school’s feed on Facebook.) At first Connor jokes that if they trained pigeons or sent messengers with ogham (an early-medieval alphabet) carved on sticks, people would probably find that fascinating too. But I ask again, hoping for clarity.

“Modern communication technology has many benefits but the virtual world simply starves our spirit as it isolates us from the natural world,” comes the reply. “We must visit real forests to see, feel and connect with nature because this nurtures our spirit.”

Part of the attraction is that spirituality takes on a different dimension outdoors. Today the solstice will be celebrated with a pilgrimage to Croagh Crom (better known as Croagh Patrick), and every full moon the school also organises open ceremonies at the Hill of Tara, in Co Meath, and Rath Niamh, in Co Roscommon.

“Usually we stand outside in nature, face the moonrise, give thanks for all the wonderful people, things, memories in our lives; acknowledge our guides, ancestors and teachers; send love, light and healing to those who would accept it. We look to the planets and stars that are visible and listen to the birds and the wind, smile freely and enjoy being in circle at a sacred space.”

There has been a revival in Druidism in recent times, and Connor believes that increasing numbers, across various age groups, are visiting Ireland’s ancient temples in alignment with the rising and setting of the sun and moon.

Pagan weddings
Many approach the school seeking baby namings and handfastings (pagan wedding ceremonies), as well as “life-path guidance”. Several types of courses are available, ranging between €105 and €700. There’s no hierarchy or dogma in Druidism, only encouragement for people to find what works for them, and by Connor’s estimation there are thousands of Druids north and south of the Border who connect with various aspects of the practice.

Traditionally, the Metonic cycle symbolised the 19 years it took to become a Druid. But given Druids’ belief in reincarnation, Connor says that some may reconnect with certain aspects from previous lives.

“There is no actual exam, and we never stop learning. Here at the Celtic Druid Temple we seek to guide each student to his or her highest expression, but they have to do all the work, they have to walk their own path and only they can enjoy and share their rewards.”

As a subject, Druidism appears so vast that there’s no quick way to encapsulate it. There are fascinating similarities with Buddhism and Hinduism among other indigenous practices, while the school’s website alone contains more than 500 pages of information. But something Connor mentions sticks out as a fitting basis of understanding to end on.

“This island has its own spiritual traditions, its own temples and guardians and it has its own answers. Instead of relying on books to find your path, go and walk in a forest, sit with a tree and simply meditate. Let that be the next step on your path.”

Miscarriages and IVF: chasing a rainbow baby (and when to stop)
7

€35,000 a bottle: most expensive Irish whiskey goes on sale today
9

Enemas, laxatives and one nut: my 10 days at a German fasting clinic
10