What’s it like living in Catalonia after independence declaration?

Opinion: The town where I live escaped violence after the referendum, but trouble arrived this week 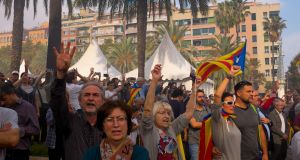 Catalonia is at a standstill on Wednesday after protesters blocked roads, highways and train tracks as part of a regionwide strike, called by a pro-independence union. Dave Walsh, a pro-independence supporter who lives in Sant Cugat, explains what it has been like to live in the region since indpendence was declared on October 27th.

Having escaped police violence during Catalonia’s independence referendum on October 1st, trouble arrived this week in the town of Sant Cugat, where I live, just north of Barcelona.

On Monday night, an angry group of 300 people, waving Spanish flags, used knives to rip down a large banner that hung from the town hall. The banner read “Llibertat Presos Politics” - “Freedom for Political Prisoners” - in support of the Catalan government ministers and activists currently jailed in Madrid, following the recent declaration of the Catalan Republic.

The unionists tussled with local police and shouted at journalists, before leaving the banner in tatters on the city’s Rambla. It was strange way of going about building “unity”. The next morning, town council staff could be seen cleaning egg stains from windows.

In contrast, downtown Barcelona on October 27th was an ocean of blue, yellow and red, Esteladas, the flag of the pro-independence movement, as thousands packed into the city centre to celebrate the Catalan parliament’s acceptance of the October 1st “yes vote”.

Pro-independence gatherings tend to be peaceful, friendly and inclusive. If you turned up draped in a Spanish flag, you’d likely be welcomed. But that night, when Spanish flags appeared on the streets, people were assaulted and the windows of Catalunya Radio - a public broadcaster - were broken by protesters wearing la Rojigualda (the Spanish flag).

Passing into Catalonia from France a couple of days a later, I spotted a lone Spanish flag flapping in the wind. A hundred metres later, three Esteladas (the unofficial Catalan flag) flashed in the afternoon sun, their flagpoles straining under the tramontane wind. A hundred kilometres down the motorway, a banner on a bridge read “Willkommen in der Republik Katalonien”.

We are now living in a state of uncertainty, not quite Spain, and not yet the Republic of Catalonia. Ireland’s lengthy transition to independence is often cited here as a way to say “patience, patience”.

Since the declaration of the Catalan Republic, life has gone on. But things have changed. The Spanish government has applied Article 155 of its constitution, claiming it must uphold the unity of the Spanish state by seizing control of public institutions, including police and public broadcasters.

Seven Catalan government ministers, after arriving in Madrid to facist chants and nazi salutes, were jailed after a hearing that lasted just a few minutes.

Two civil society activists, known as the “Jordis”, have spent more than three weeks in custody. Eight schoolteachers in the small town of Seu d’Urgell are under investigation for having debated the referendum in the classroom, after the parents of one child complained. Two people in Lleida were arrested for criticism of police violence, while the editor of a popular satirical magazine is in trouble for making a joke about the Spanish police. Since mid-September, a litany of court orders has been directed at activities, publications and websites that challenge the authority of the Spanish government.

Yet those involved in fascist-like or violent behaviour can seemingly act with impunity. The number 155 has now appeared alongside nazi swastikas daubed the houses of pro-independence supporters, and on a monument to the poet Verdaguer. A few days ago, one young man in Mataro was beaten and hospitalised while leaving his house wearing a pro-independence t-shirt.

The unleashing of Article 155 means the central government will seize back autonomy from Catalonia. On Tuesday, civil servants from Madrid arrived to “take over” government institutions in Barcelona, demanding that work be carried out in Castellano rather than Catalan, echoing the days when Catalan was banned under Franco.

Today, Catalonia has shut down in a general strike, in an attempt to warn prime minister Mariano Rajoy of the power and resolve of the Catalan people. By 9am this morning, protesters had stopped traffic on the AP-7 Motorway, part of the Europe’s E-15 artery that links Spain and Portugal to the rest of Europe.

It’s not clear if the agreed elections on December 21st can happen in any fair way, especially if candidates are in prison or in exile. While a pro-independence coalition will likely win, the continuously intransigent Popular Party under Rajoy (which holds less than 10 per cent of seats in the Catalan parliament) is adamant it will continue to apply Article 155.

On December 4th, Dublin City Council will vote on whether the Catalan flag will fly from City Hall for a month. If councillors vote yes, this will be seen as a strong sign of solidarity for many people in Catalonia who, until their sacked president Carles Puigdemont arrived in Brussels last week, believed the EU had abandoned them. On Tuesday, he was joined by 200 Catalan mayors to protest the silence from the institutions.

Symbolic support is welcome, but it is unfortunately not enough. EU governments and opposition parties must hold the Rajoy government to account, to ensure the political prisoners are released and that a political solution is found to improve the relationship between Spain and Catalonia.

The outcomes of the forthcoming Catalan elections should be subject to rigorous scrutiny, to ensure they take place in a fair and democratic manner. EU members, whether countries or individual citizens, have a duty of care towards other inhabitants of this shared community.

By ignoring the Catalonia crisis, we risk its repercussions throughout Europe. This is about more than flags - the entire “European Project” could be at stake.