‘There’s a shooter’ we heard, just blocks from where we were 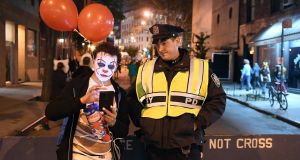 A man dressed in a clown costume talks to an NYPD officer during the 44rd Annual Halloween Parade in New York, following an attack in Manhattan that left eight people dead. Photograph: Angela Weiss/AFP/Getty Images

I was lying on a physiotherapy table bed in a clinic in Soho when I first heard the sirens. It’s something you hear a lot in New York. There is, however, a particular pitch, a familiar pattern to these sirens when something really bad has happened. There were more fire trucks and police cars than usual, flying down Broadway, as I lay there stretching my hamstring.

“There’s a shooter on West Houston,” a voice said. This was blocks from where we were. I’ve learned in these moments to verify the information first, find out the real news and breathe through rising panic. My phone was charging nearby and I calmly stood and walked over, afraid to look at it.

First, Twitter. The news had not yet broken. Then a newspaper. Nothing. Then, a search. Again, nothing. Then back to Twitter. In that short time, some information was popping up. The sources I saw were not credible. “It could be anything,” I thought. Within 20 minutes, a television was switched on. West Street and Chambers, the people standing around watching it told me.

My daughter was in Brooklyn. She was away from this. But I was away from her. My husband was underground on the subway, delayed. How would I get home? Would the trains be running? What has happened? I breathed deeper and made my way to the subway. With my family in different places, a maternal determination took hold of me. I’d run home across the bridge if I had to.

Passengers on the subway crouched their heads into their phones more than usual. Transit wifi means you can read anything online, anytime, unless you go through black spots of no service. A tentative, nervous text comes from my mother. As I try to reply, we stop on the tracks, delayed. I think of how frightening it must be for her to wait for those three dots to tell her I am safe.

I still don’t know if it’s a truck or a shooter. The noise of the theories and the strange, sad air surrounding us all hurts my head. I search through my phone for some music to calm me. Nothing works until I find Paul Brady’s The Island. I play it on repeat until I get off at my station in Brooklyn and text my mother to tell her I am okay. I know my daughter is home. I know the truck that took these lives is in one small part of a big city but an attack on the place where you live is an erosion of your sense of safety. That’s exactly what these things are designed to do.

I hurry down the street from my subway stop to my apartment building and rush upstairs. I walk in and go straight to my daughter. She’s lying idly, happily on the floor, drawing a picture. I lie down beside her and hold her. She laughs and I squeeze her tighter. It’s Halloween and she’s excited and all I can think is how happy I am to be next to her.

As I apply make-up for my costume, I put on the emotional armour I need to smile a brave face and shield the children from the horrors that adults do to each other. I know that tonight, some kids are excited to go trick or treating and their parents won’t come home. I know some kids were put on lock-down in their school in their costumes. This is an erosion of innocence I can hardly bear.

Children dance and jump around the streets, giddy with sugar and excitement. A mix of joy and heartbreak hangs delicately in the air. The sounds of squealing witches, fairies, superheroes and robots and in the far off distance, the sirens and helicopters blare.

My Rosie The Riveter costume was meant to be a statement about who’s doing the hard work in the world right now. In the wake of tragedy, dressing up and eating sugar feels glib and wrong. I wonder do other people feel this way and look around me and decide no. They are going on. There is no other choice.

New Yorkers talk about how strong they are and how they are not to be messed with as a city and this is true. I wish we didn’t have to brand ourselves like this. I wish for tolerance, acceptance, and above all, compassion. And I wish so much that this divisive rhetoric of ignorant hate would stop. Just, stop.

The Empire State building lights are blinking and shining and putting on a very flashy show in the New York skyline to celebrate Halloween. I can see them from my living room window. They are beautiful. In the distance I hear another helicopter. The strength of this city is dancing in the night as eight souls lie lifeless, never to dance again.