Emigrants still have a stake in Ireland, so why can’t they vote?

Citizens abroad should have a vote in all elections and referendums, not just for the presidency 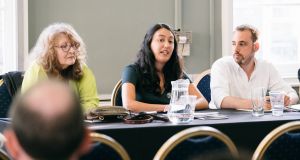 Emigration today is different from how it was in the past. It is far more fluid, and people are no longer isolated from Ireland when they leave, no matter how far away they go.

They travel back and forth, and keep up with the news and politics as it is happening, using the internet and social media. They stay involved with political debate in Ireland, and in contact with friends and family on Facebook, WhatsApp, email and Skype.

Irish citizens abroad continue to be stakeholders in Irish society. In many cases, their desire to return, their continuing social attachments and ties, and their financial commitments and obligations ensure emigrants’ well-being is at least in part bound up with Ireland and the direction the country takes.

Some have left voluntarily, but many would rather have stayed in Ireland. Even those who leave voluntarily can be subject to “involuntary non-return” - an inability to return when they want to because of the lack of jobs and opportunities in Ireland or other barriers - around banking, housing or schooling, for example.

Since the financial crash in 2008 the Irish government on a number of occasions has called upon the diaspora to help Ireland, by setting up events like the Gathering and the Global Irish Forum, to which there has been a good response from the emigrant community.

Simultaneously, though, there has been a growing awareness amongst the Irish abroad of the democratic deficit in the relationship.

When a citizen leaves Ireland they have the right to vote in elections and referendums for only 18 months, and that right depends on them physically returning to their constituency to cast their vote. This status has not changed since the Electoral Act of 1963.

In the 50 years since, dozens of countries around the world have altered their laws to enable citizens abroad to more fully participate in their political systems. Why has Ireland, to date, resisted the demands from citizens abroad to end their disenfranchisement?

Extending the franchise will not only alleviate this widening disconnect between what Ireland expects of our citizens abroad and what it offers them in return, but also cement the relationship between Ireland and its diaspora for the future in an increasingly globalised and competitive world.

Although absent (most hope this is temporary) from the State, Irish emigrants remain subject to many of its collectively binding decisions. Denying any citizen or group of citizens their right to participate as an equal member of the democratic community is to deny their status as citizens. No wonder there is pressure on Ireland from the European Union to reconsider its position on votes for citizens abroad.

The appetite for such a move was evidenced by the #hometovote movement during the marriage equality referendum, and we’re likely to see a similar demand again at the referendum on the Eight Amendment next year.

In its revised diaspora policy, Global Irish. Ireland’s Diaspora Policy, published in 2015, the Irish government acknowledged the issue of voting rights in Irish elections is of “enormous importance to many Irish citizens abroad” and the existence of “well organised and vocal campaigns” on the issue.

The government also acknowledges that the Convention on the Constitution in 2013 came out clearly in favour of citizens resident outside the State having the right to vote in Presidential elections, with 78 per cent agreeing.

For those of us living in Britain, we face another level of disenfranchisement after Brexit. Without the right to vote for MEPs, we will become unrepresented as European citizens too. At a meeting, at the London Irish Centre in Camden this summer, Fine Gael MEP Brian Hayes said a way should be found to allow Irish citizens living in the UK to continue to be able to vote in European elections.

Recently the Taoiseach confirmed, in a statement as eagerly welcomed in the diaspora as Enda Kenny’s original announcement, that there would be a referendum on extending the right to vote in presidential elections to citizens living outside the State in 2019.

On Tuesday, Senator Frances Black will host a meeting in Leinster House to discuss this referendum, and the wider issues around extending the right to vote to Irish citizens abroad.

The Votes for Irish Citizens Abroad (VICA) campaign group, of which I am chair, will be meeting with TDs and Senators. We’re a multi-generational group of Irish citizens, based in London, who were inspired by renewed emigration from 2009 onwards to campaign on this issue. We aim to secure the right to vote in Presidential elections for all Irish citizens, along with the same right for general elections and referendums.

We believe that proposals for the presidency are a step in the right direction, but it’s clear that disenfranchisement of Irish citizens is happening at every level. The Irish political system needs to catch up with our international peers and address these issues in a holistic way.