I wonder how Lady Liberty looked to those arriving in America. Did her shining torch provide comfort? 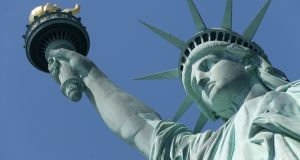 Was the Statue of Liberty a beacon of hope to the 12 million immigrants who passed through Ellis Island? Photograph: iStock/Getty Images

The queue to board the ferry departing Battery Park is zoo-like. Crowded and cramped, it moves at a snail’s pace herded by workers in raincoats. People bump into each other’s backpacks, parents struggle to keep their children still or well-behaved, and a mother takes her crying baby out of their pram.

“I don’t know if our Irish ancestors came in through Ellis Island,” the woman behind me tells her teenage son. I stifle a smile, smug in my Irishness amongst a sea of American accents. They’re not all New Yorkers, by the sounds of it, and are probably as foreign to the city as I am.

Battery Park is Manhattan’s southernmost tip. It gets its name from the artillery batteries placed there during New York’s early years as a means of protecting the growing city’s settlements. It sits as a quaint green space between brick and sea. Look to the harbour from the park and you might just forget you’re in America’s most populated city. A faint siren will probably draw you back to the direction of the buildings, which your eyes will follow up and up until your neck is craned towards the sky.

The Battery also contains South Ferry Terminal, the port from which ferries bring visitors to Liberty and Ellis Islands, where more than 12 million immigrants passed through on their way into the United States between 1892 and 1954. This is what we’ve been queuing for.

We push forward some more. The teenage boy in front of me is slower than most, his head buried in his phone. There’s a smell of fried meat mixing with that of churros, the bizarre combination wafting over from a nearby hotdog stand. As we approach the ramp that brings visitors to the security centre, I’m slightly concerned by a “No guns allowed” sign. The parents of the crying baby awkwardly push the empty pram up the ramp and I wonder how they’ll manage through the checkpoint.

Inside is just as busy. This is airport-like security with guards ordering us to take off shoes, hats, scarves, jewellery and coats and to put those in baskets with our bags. They go through a scanner while we walk through detector gates. A green light clears you, a red light earns you a search.

Outside, a three-deck boat named “Miss New Jersey” bobs in the water. The crowd boards to be greeted by a safety message before we set off. The further from Manhattan we sail, the better a view of its skyline we get. It doesn’t take long to get an up-close view of Lady Liberty. Though she would have originally resembled a shiny penny, her copper exterior has oxidised to the green colour the world now knows her by. Despite her 305 feet, she’s smaller than I expected. Her height is equivalent to a 22-storey building, tall for Dublin but not for a city that has skyscrapers of over a hundred floors.

The boat docks at Liberty Island, the statue’s back facing us. We’ve completed the migrational journey backwards. We queue all the way through the gift shop to enter another security centre. It’s a carbon copy of the one before and I wonder where we’re supposed to have acquired weapons of mass destruction since the last checkpoint. If it’s a historical experience they’re aiming for, they’re certainly achieving it, as the security measures seem so ridiculously over the top that you can’t help but feel like you’re being vetted for entry.

Once it’s confirmed we haven’t fished any arsenal from the sea, we finally get to Liberty’s pedestal. The inside also serves as a museum, what looks like a giant lantern welcoming visitors to the lobby. It’s one of two torches Liberty has held in her 130 plus years presiding over New York harbour. The one she currently holds was completed between 1984-86 by a group of French craftsmen who recreated Bartholdi’s original design. It no longer lights up as an illuminated symbol of the free world, but it’s 24 carat gold-plated flames are a reminder of America’s position in the world.

From the balcony of the pedestal you can look one of two ways, out or up. Out gives a wider view of the Manhattan skyline we saw from the boat. Up doesn’t give a clear view of Liberty’s body, rather an angle that makes you appreciate the magnitude of her size as a statue. The detail of her features, even the way her robe folds, all serve as a reminder that she is not just a monument, but a piece of art gifted from one nation to another. This realisation somehow makes her grander than she initially appeared from the boat.

As I make my way back to the ferry, I wonder how she looked 130 years ago to those arriving in America for the first time. Was she a beacon of hope to the 12 million immigrants who would have to pass through Ellis Island? Did her shining torch provide comfort to those who would have to face a vetting process, to those wondering if they would be given the chance of a better life? Or was she just a monumental reminder of how far they were from home?

I board Miss New Jersey and settle on the top deck, the safety message once again blaring from muffled speakers. The engine cranks up and in true tourist fashion, passengers strain to look over each other for another look at the statue. We start to move away from the port and the water splashing against the boat cushions the purr of the engine.

The ferry makes white ripples of the water. As the statue watches us tear through the waves, I become one of the many Irish whose journey to Ellis Island has been overlooked by her. And Lady Liberty has never looked so green.