Why has the Government done nothing to facilitate emigrant voting?

Opinion: The few who are eligible must take time off and pay for expensive flights 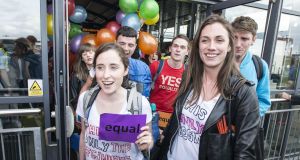 The Get the Boat to Vote campaign saw young emigrants return to vote in the 2015 marriage equality referendum, using the #Hometovote hashtag on social media. Photograph: Dave Meehan

Tens of thousands of recent Irish emigrants could potentially legally vote during the referendum on the Eighth Amendment on Friday, May 25th. But, in an ironic turn of events, our voting system will only accommodate those with the means to travel.

As founders of the We’re Coming Back and Get the Boat to Vote campaigns, we were both involved in organising the #Hometovote movement for the Marriage Equality referendum in 2015. Despite the public outpouring of support, and the welcome back for those who “voted with their feet” as Enda Kenny put it, absolutely nothing has been done since to facilitate an emigrant vote. Why?

Under our electoral laws, Irish emigrants may fully retain their voting rights at home for a period of 18 months after leaving.

Although the vast majority of citizens overseas have been out of the country for longer than a year and a half, those who have recently left - most of them too young to have voted in the 1983 referendum that brought in the Eighth Amendment, or even been alive to see it enacted - may yet have their say on May 25th.

Registration for a postal vote in this referendum closed last Saturday. But, unlike students living away from home or Irish residents away for work purposes, ordinary Irish emigrants could not avail of this option, even if they fall within the 18-month restriction.

If they want to vote, they have to instead seek time off work and purchase expensive flights back to their home constituency. Both are considerable barriers to exercising a democratic right, particularly for those living in the US , Australia, Canada or New Zealand.

More than 30,000 Irish people emigrated between April 2016 and 2017, according to the Central Statistics Office. Using these figures, the Home to Vote campaign for a Yes vote in this referendum - run this time by the London Irish Abortion Rights Campaign - estimates that the number of vote-eligible emigrants who fall within in the 18-month limit could be at least 40,000.

But the number who will actually cast a ballot will certainly be much lower, because of the way electoral legislation discriminates against those who can’t travel.

The CSO migration figures also reveal the highest rates of emigration are in the 15-24 and 25-44 age brackets. The most recentIpsos MRBI poll for The Irish Times showed support for repeal is highest among young voters (67 per cent among 18-24-year-olds and 58 per cent among 25-34-year-olds, compared to 43 per cent of 50-64-year-olds and 24 per cent of those aged 65+). It is therefore likely that the lack of voting provisions for Irish citizens abroad will disproportionately impact the Together for Yes campaign.

Many who have emigrated are not aware of the timeframe for which they retain their voting rights while living abroad. Some who have lived outside of the country for more than 18 months remain on the electoral register, which creates scope for people to commit electoral fraud by voting without realising they are not entitled to.

Given the profile of the #Hometovote movement in 2015, we believe the Government and the Electoral Commission had a responsibility to lead an information campaign, targeting Irish people overseas to inform them of the conditions of their right to vote, especially when the penalties for committing electoral fraud are so severe.

Someone who does not meet the criteria to be vote-eligible, but comes home to vote anyway, is liable to be fined up to € 3,000 or even imprisoned for a period of two years.

The only system that currently exists to remove long-term emigrants from the Irish electoral register depends on intermittent, door-to-door checks by the Department of Housing and Local Government. As we know, this approach means there are often inconsistencies and inaccuracies in the register.

A number of those involved with the current #HomeToVote campaign, as well those of us involved in the 2015 campaign for the marriage equality referendum, have alerted the Department of Foreign Affairs and successive ministers for diaspora to the widespread confusion that exists regarding the voting provisions for Irish citizens abroad.

We’re Coming Back, Get the Boat to Vote, and Be My Yes campaigns made three joint submissions in 2015 and 2016 calling on the minister and department to extend a postal voting option to all emigrants eligible to vote in elections under the existing legislation; introduce a bill to double the current window from 18 months to three years; and clarify publicly the criteria separating vote eligible emigrants from non-eligible emigrants.

Regrettably, nothing has been done to update or bring clarity to the existing legislation.

Instead, groups orchestrating the campaigns to get recent emigrants #HomeToVote have gone to great lengths to provide correct information about who can and can’t vote, but the onus should not be on them to police this. If the result of the referendum is challenged on the grounds that people have voted who were not eligible under existing legislation, those overseeing the election should be held accountable.

David Burns and Joey Kavanagh were involved in organising the #Hometovote campaign to vote Yes for marriage equality in 2015, with the organisations We’re Coming Back and Get the Boat to Vote. They both now live in Dublin.