Living abroad? Have your say on who you want to be President

Irish Times Abroad is conducting a ‘virtual vote’ for emigrants. Here’s how to participate 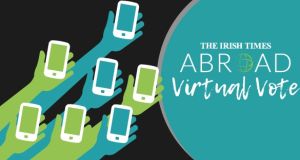 Irish Times Abroad has built a bespoke ‘virtual voting tool’ to offer its disenfranchised readers living overseas a say in elections and referendums.

The President of Ireland “represents all the people of Ireland, both at home and abroad”, according to president.ie, yet Irish citizens residing outside the country have no say at the ballot box on who represents them.

Unlike more than 130 countries worldwide, Ireland has no system for citizens abroad to vote in either elections or referendums. Under the 1992 Electoral Act, Irish citizens retain their right to vote for just 18 months after moving abroad, as long as they intend to return to Ireland within that timeframe.

Irish Times Abroad wants to offer its disenfranchised readers living overseas a say, using a bespoke online “virtual voting tool” for elections and referendums. More than 2,000 members had their say in a similar virtual vote on the Eighth Amendment referendum in May.

This week, members of the Irish Times Abroad Network - who are living abroad, and opted in to participate in polls - will receive an invitation by email to cast a “ballot” in our online virtual vote for the 10th President of Ireland, and in the referendum on blasphemy.

Each email will contain a unique link to a “ballot paper” where they can rank the candidates in order of preference, as well as provide some basic information about themselves, including where they live, how long they have been abroad, their age and gender. They will also be able to indicate whether they would vote Yes to remove the offence of blasphemy from the Constitution, or No to retain it.

This ballot will be completely anonymous, and not linked to their Abroad Network profile, so we do not know how each individual votes.

To prevent the system being “gamed” by supporters of a particular candidate or referendum position, the ballot link can only be used once.

If you are living outside of the Republic of Ireland and would like to have your say in the virtual vote, you can join the free Irish Times Abroad Network here. Please ensure you tick the box to participate in polls. You will receive your online ballot paper link by email within 24 hours.

The poll will close at 9am (Irish time) on polling day, Friday, October 26th. Results will be published on irishtimes.com and sent to Irish Times Abroad Network members by email.

This survey is being conducted among self-selecting individuals. It is not a weighted survey and does not purport to accurately represent the wider Irish emigrant population. All results should be seen as indicative rather than definitive.

This project is a collaboration between the editorial and technology departments in The Irish Times, supported by the Google Digital News Initiative.

2020 bargain cars: What to buy with a limited budget in mind
Real news has value SUBSCRIBE