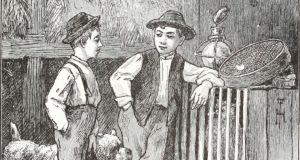 The second-biggest selling book in 19th-century America – after the Bible – was a series of primers authored by Scotch-Irishman William Holmes McGuffey. Selling more than 120 million copies between 1836 and 1960, McGuffey’s readers were to be found in most American public school classrooms, and generations of schoolchildren were shaped by the lessons found in their pages.

The son of pioneer farmers, McGuffey rose from the most humble of backgrounds to prominence in academia and children’s publishing. He began his career in education aged 15, as a travelling teacher, attending the Presbyterian Old Stone Academy in Pennsylvania between jobs. He graduated from Washington College in 1826 and three years later was ordained a Presbyterian minister. He became an instructor in ancient languages at Miami University, Ohio before being appointed Chair of moral philosophy at the University of Virginia in 1845, a position “Old Guff” held until his death in 1873.

While developing his academic career, McGuffey was also an active promoter of public education. Committed to the ideal of universal education, he was involved in the founding of non-sectarian public schools across the Midwest, and in the organisation of formal primary schooling in the fledgling state of Ohio.

All the while, his rural upbringing remained clear in his memory. He had a lived understanding of the needs of children from pioneer families, recognising that geographical isolation was a barrier to their education and that they often started school much later.

McGuffey conceived a simple but effective solution to educating poor and isolated children – an affordable and accessible textbook. His series of six Readers was first published in 1836 and was undoubtedly his most important work. The Readers were the world’s first widely used series of textbooks, and assisted the overall evolution of American education as the standardised reading text for most schools.

The Readers shaped American culture for generations and provided relatable, accessible and clear instruction for America’s pioneer children. The First Reader’s simple lessons aimed to start children on their reading journey by using repetition and relatable, illustrated stories, rather than lists of words to be memorised. The books appear outdated today, but were novel in the nineteenth century for their use of proverbs and selections from Shakespeare, Milton and Byron.

All six Readers were constantly revised and updated for decades, going through many editions. Henry Ford paid for a full reprinting of the 1857 edition, distributing free copies to schools all over the USA.

Be kind to all, and do not waste your time in school

Undoubtedly, the Readers also reflected McGuffey’s Presbyterian faith, communicating patriotism and moral lessons, such as teaching children to be kind. He was a friend of Calvin Stowe (husband of Harriet Beecher Stowe) and was known for his philanthropy to African-Americans and the poor, but overall, was a conservative teacher who sought to instil Christian values and whose books only represented white children.

The final page of the First Reader told children:

“Your parents are very kind to send you to school. If you are good, and if you try to learn, your teacher will love you, and you will please your parents. Be kind to all, and do not waste your time in school.”

His books fell from favour from the mid-twentieth century, reflecting as they did outmoded social ideas and running counter to the American constitutional prohibition on religious indoctrination in schools. However, the books are still in use among some American home-schooling families as a valued teaching aid, a reminder of one of the purposes for which they were originally conceived.

This Extraordinary Emigrants article was written by Dr Angela Byrne, Department of Foreign Affairs and Trade Historian-in-Residence at EPIC The Irish Emigration Museum in Dublin’s Docklands, an interactive museum that tells the story of how the Irish shaped and influenced the world. Learn more about the Irish in global education at the exhibition, "Irish Educators Abroad: Building Something Wonderful’" at EPIC, opening June 6th and running until end September.