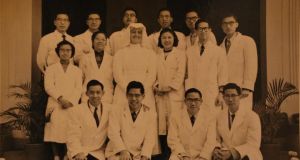 In 1947, Loughrea-born Cathleen Monahan was one of a group of four nuns who were the first to qualify as physicians in Ireland. She had entered religious life in 1939, three years after the removal of the papal ban on Catholic women religious working in surgery and obstetrics. She continued to be a pioneer and trailblazer throughout her career as a medic, lecturer, and global health educator.

Shortly after Monahan’s graduation from UCD, the Missionary Sisters of St Columban were invited to run Ruttonjee Tuberculosis Sanatorium in Hong Kong’s former Naval Hospital. In January 1949, Monahan travelled to Hong Kong accompanied by Cork-born Sr-Dr Gabriel O’Mahoney, five nursing sisters and two lay sisters. Monahan was appointed medical superintendent of the sanatorium and under her guidance, it grew from modest foundations to become an international centre for tuberculosis research.

Monahan and her colleagues faced a challenging environment in their new home. A free, interfaith sanatorium supported by donations from the colony’s wealthier residents, Ruttonjee mostly took care of refugees from mainland China. The establishment of the People’s Republic of China in 1949 caused an exodus that saw Hong Kong’s population soar from approximately 600,000 to more than two million. TB was rife in the crowded colony – in 1949, it accounted for two-thirds of all deaths from notifiable diseases in Hong Kong – but Monahan and her colleagues also found time to visit the so-called “boat families” living in the harbour, and lepers living in the Portuguese territory of Macau.

Monahan’s contribution to the eradication of TB in Hong Kong extended far beyond Ruttonjee. Quickly establishing her reputation as a medical practitioner, from 1952, she lectured in clinical medicine at University of Hong Kong and the Chinese University in Hong Kong. She taught almost every medical student at both universities from the 1950s to the 1980s and past students fondly remembered her cheerfulness.

Monahan collaborated with international research institutes, making significant contributions to tuberculosis management, and publishing extensively in medical journals. Her many awards and honours included a World Health Organisation fellowship in TB at the University of Wales (1952 to 1953); the Sir Robert Philip gold medal for outstanding service to medicine (1965); an honorary doctorate in social science from the University of Hong Kong (1978); and an OBE (1980).

Internationally recognised as an expert in tuberculosis and in global health, Monahan gave countless lectures worldwide and spent a good deal of time in Africa sharing her knowledge of infectious diseases. In the year before her death, she spent time in Ethiopia during the catastrophic famine that killed more than one million people.

By the time of her death in 1985, TB was almost completely eradicated in Hong Kong, partly thanks to the large-scale immunisation scheme she established in 1952. This enabled Monahan to turn her attention to working with community drug abuse and addiction projects. Ruttonjee sanatorium was converted to a general hospital in 1991, testament to the success of Monahan’s endeavours against TB in south-east Asia. Her research on low-dosage treatment of the disease where resources are limited is an important legacy, as TB remains one of the world’s deadliest infectious diseases and is a leading cause of death for people with HIV/AIDS.

This Extraordinary Emigrants article was written by Dr Angela Byrne, Department of Foreign Affairs and Trade Historian-in-Residence at EPIC The Irish Emigration Museum in Dublin’s Docklands, an interactive museum that tells the story of how the Irish shaped and influenced the world. Learn more about the Irish in global education at the exhibition, “Irish Educators Abroad: Building Something Wonderful” at EPIC, opening June 6th and running until end September.