What connects an Irish gaucho in Argentina with Chris de Burgh? 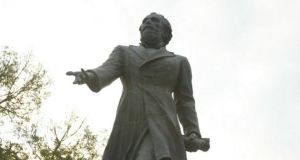 A statue of Eduardo Casey, the Irish descendant who founded the Argentine city of Venado Tuerto

An Irish gaucho, galloping at full tilt across the wide-open plains of Argentina – it’s a pretty impressive, even romantic image. But not as impressive – or, indeed, as romantic – as the life of Eduardo Casey, founder of the city of Venado Tuerto.

If the name is ringing a somewhat musical bell as you read, that may not just be because of all those harmonious vowel sounds: this city of 70,000 inhabitants is known on this side of the Atlantic as the birthplace of the singer-songwriter Chris de Burgh. But Venado Tuerto’s Irish connections go back at least a century beyond that.

In or around the year 1830, a Westmeath man called Lawrence Casey arrived in Argentina with his Wicklow-born wife Mary. Lawrence became the first estanciero to pay a million pesos for a block of land, and the Caseys produced nine children: five boys and four girls.

Eduardo was born in 1847 on a large ranch called El Curazno at Lobos, Buenos Aires. He and his brother Lorenzo had an idyllic childhood. Lorenzo’s daughter Imelda later recalled that the pair – accomplished riders even as boys – would spend hours galloping across the pampas. “Lorenzo used to tell him: ‘Come on Eduardo. It’s lunch time and Mom doesn’t like us to arrive late…’, but to no avail. He was always galloping far-off... and looking at the huge grassland he exclaimed: ‘Look at this camp: look, Lorenzo, it never ends’.”

This information was supplied to the column by Jose Ignacio “Nacho” Wallace, who wrote to tell us that Venado Tuerto is his home town. “It was founded by an Eduardo Casey, an Irish descendant who helped with the Irish immigration in the second half of the 19th century (among many other things). We dare to say he was ahead of his time,” Jose says.

With vast swathes of land available for farming and an active recommendation system begun by Casey and others, large numbers of Irish people settled in Argentina at this time. Among them were Jose’s great-grandparents. His father, Jose Bernardo Wallace, is closely involved with the Federation of Irish-Argentinian societies and has researched and written about Eduardo Casey for its Dictionary of Irish Latin American biography.

Casey was an innovative farmer. He was the first exporter of cattle on the hoof to England and helped to develop the railway and cold-storage technology which would, eventually, change the nature of food production in the 20th century.

His childhood passion for horses never left him: as an adult he founded a stud farm and, though he liked to dress in a stylish frock coat and top hat, was always ready to get into his shirtsleeves and take part in the gaucho races, or cuadreras.

“When winning he would pay his bet, and when losing he would pay anyway,” his niece recalled. “This was the reason why gauchos loved Don Eduardo, and he was treated as a real criollo.”

Casey made a fortune. Among other things, he founded the Jockey Club of Buenos Airea and built the port quarter of Montevideo in neighbouring Uruguay.

However, a financial crash in 1890 led to disaster. Having lost everything, Casey went to London, raised £100,000 in fresh loans and paid off his small investors. He could never get back on track, though – and in 1906, after 16 years of trying to pay off his debts, he took his own life by throwing himself under a train.

He was 58 years old. His wife Maria had left him. All his personal possessions had been auctioned off. He was still full of new business ideas – he wanted to build social housing for workers who were living in city tenements – but by this stage, nobody would give him an audience.

“He saw the engine coming,” wrote another biographer of Casey, Roberto Landaburu, “He . . . looked farther at the green Argentine pampas, and he went galloping, like a gaucho, with the last gallop that never ends.”

Told you it was romantic. But I never promised you a happy ending.

*If you know of an Irish connection which would interest readers of this column, please email awallace@irishtimes.com with details of the story, as well as your contact address.