‘I moved to New York with a guitar and $200, and ended up playing with Bowie’

For guitarist Gerry Leonard, the city itself has been his ‘biggest teacher’ 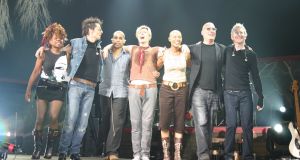 Gerry Leonard (far right) with David Bowie and band: ‘The pinnacle of my career in New York.’

Heading out on my first ever visit to New York, I was told, “Don’t look up!”; thieves will know you are a tourist and push you in a doorway and mug you . I have lived in New York now for more than 24 years, and though I’ve seen the best and worst of the city, I haven’t been mugged yet, touch wood. There are always rumours and myths about faraway lands and New York is no different. But there is no other place quite like this city, and it’s not what you think it’s going to be.

I had been playing guitar with bands in Dublin in the 1980s and early 90s, culminating with one called Hinterland. We signed with Island Records in 1989, and when we met the founder Chris Blackwell, the man responsible for so many of our favourite artists from Bob Marley to Nick Drake, we thought we were on our way. In the end it all came and went, and I found myself ready to start over with only a nice leather jacket left over from the deal.

I moved to New York in late 1993 with a guitar, $200 and a promise of a gig. The gig lasted a few months and helped get me a foot on the ladder. But it soon became clear to me that this ladder just led to another bigger ladder. I had a long climb ahead of me.

One thing New York taught me early on was the importance of defining oneself. I thought I was pretty decent on the guitar; it had been my passion for all my teens and 20s. I had studied hard, and with my band mates over the years, had stayed up into the wee hours talking and dreaming about what could be. We wrote songs and riffs huddled over a small electric fire in a garage in Howth, carving out a path we were sure would lead us to our destiny.

Huddled in a one-room tenement apartment in the lower East Side of Manhattan in the early 90s, that all seemed like a fragile plan. There was no more running home to Mam with a bag of laundry and the promise of a Sunday dinner.

There I was with small acorns of ideas in this huge unrelenting city, when it started to dawn on me. New York, for all its enormous pressure, also has a way of embracing new ideas. You are defined only by the last thing you did, and with that kind of blank slate, you can be who you want to be. There is no “who do you think you are” mentality. In fact, there is a pervasive encouragement to try out new ideas, no matter how far-fetched.

Dublin had been all about dreams and what might be, but my next big realisation was that New York was about process, about actualisation. You had to act to survive.

Tired of knocking on doors and following up dead end leads, I decided to book myself a solo gig in the little oasis called Sin-É in the East Village. I had played Sin-É a bunch of times and in this unlikely cafe with the chairs and tables pushed back to make room for the stage, I had seen musicians and artists put their work on display in a very creative and supportive atmosphere.

I gave myself six weeks to prepare, and set about creating Spooky Ghost, which became my solo project and alter ego. The first gig was shaky and embryonic, but it grew to become a strong identity for me, where I put all the things I liked about the way I played and wanted to express musically.

There were so many guitar players in New York of such a high standard, that it wasn’t about competing. I needed to figure out my strengths, and just as importantly my weaknesses, and become the sum of all these parts.

I had always had a love of the sonic possibilities of the electric guitar, so I tried to find a way to conjure this up live. I built my own crazy guitar effects setups, tinkering and rebuilding until I got the equipment to respond the way I heard it in my head, something I still do to this day.

Bit by bit I developed a reputation for being a sonic painter guitar player, which was what came of my kitchen table designs and inventions. I developed other skills too. I learned the hard way that not being properly prepared for an audition in New York was a big disadvantage. I almost got the gig with one of my favourite bands, The Blue Nile, by sort of knowing the songs, but another New York guy came in and nailed it. When I got my next audition with Cindy Lauper, I was over prepared, and got the gig. For the first time felt I was making my way into the New York scene.

One thing led to another. Before long I was working with Duncan Sheik, another artist with a chart hit. We bonded over the English band Talk Talk, who had made a fantastic record called Spirit of Eden. It was with Duncan’s support that I got to pursue a more Eno-esque sonic landscape, which was from such a different root to the more American style of guitar playing.

All that work in the garage in Howth was finally coming into focus. I was often asked to come to recording sessions as a bookend to the more straight guitar players. In allowing myself to grow into my own aesthetic, I had created space for myself. New York was the filter that had sifted away all the clutter and distilled me into my essence.

This bookend role continued all the way to meeting and playing with David Bowie, the pinnacle of my career in New York. I was introduced to artists like Duncan Sheik or Suzanne Vega or Laurie Anderson mostly as a result of recommendations from producers or other musicians, and I met David the same way, when a producer I had worked with on a Duncan session called on me to do my thing on a David track.

I brought it home and after my initial panic of “Oh my God that’s David Bowie singing”, I just decided to do my thing as I would on any session. I brought it to David and he loved it. He asked me back a few more times.

At my next Spooky Ghost show, I got the message that David was coming to see first-hand “if Gerry could rock”. When I say show I mean a gig in a 50-seater coffee house called the Living Room which had taken over after the demise of Sin-É. David Bowie sat on a half broken chair and joined the stage banter by heckling me, while we played our songs and improvisations like our lives depended on it.

The happy end was, he asked me then to join his band and play on the Heathen record and tour in 2001. I eventually ascended through the ranks to be his MD for the year-long international Reality Tour in 2003, and comeback record The Next Day in 2011.

So there it is. New York has been my biggest teacher, a tough unrelenting master but ready to hand out reward beyond my dreams. I am grateful, and I’ve a feeling it’s not over yet.

Gerry Leonard will be "in conversation and performance" with Eoin Deveraux at Dolan’s Warehouse in Limerick on Sunday October 8 at 7.30pm as part o the i.ny festival, exploring the relationship between Ireland and New York. Tickets €25. See thisisiny.com/leonard-devereux

Irish Times Abroad wants to hear from readers living in New York. Send your My New York Story (400 words max) with a photograph of yourself to abroad@irishtimes.com before Monday, October 9th. A selection may be published online next week. Thank you.